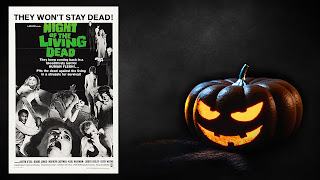 Ahhh you thought a theme day meant you might miss out on a Hallow-vent Calendar entry, didn't you? Never fear, the Hallow-vent horror h-aficionado David Ames has you covered as Day 27 is the 1968 film Night of the Living Dead ...


In keeping with the theme of 1968, today I wanted to touch on an amazing piece of film history. Occasionally a piece of pop culture comes along that impacts the world in such a transformative way that it will never be the same. In 1968, there were already a few classic horror films which permeated the mind of any moviegoer when the genre was mentioned. Films like Psycho, Nosferatu, and the series of Universal monster movies all played into the public mindset, setting up conventions that audiences expected to experience. In 1968, those conventions were challenged and then changed forever when a young man named George Romero released a low budget monster movie. That movie would eventually inspire an entire genre of film and create what most people now view as the classic zombie. This film was Night of the Living Dead.

The film opens with two siblings, Barbara and Johnny, as they go to visit their father’s grave. A shambling and seemingly lifeless man attacks Barbara and, in an attempt to save his sister, Johnny is thrown against a headstone and killed. Barbara flees and eventually comes across a farmhouse. Inside she finds a dead body and flees outside only to be confronted by the man chasing her. He is fought off by a truck driver named Ben who helps her into the farmhouse and then proceeds to barricade the door. Ben searches the house and finds a radio and a rifle and as the night progresses, Barbara begins to go insane.

While they search the house, Ben and Barbara also discover that there is a family holed up in the cellar. The parents, Harry and Helen, can’t stop arguing, even in front of their young daughter, Karen, who was bitten by one of the people and is very sick. Shortly after, a teenage couple named Tom and Judy also take refuge in the house after hearing a radio bulletin about the strange occurrences happening all over town. While the reports flood in that this is happening all over the eastern united states, Ben and Tom begin to fortify the house. Harry continues to try and convince everyone to hide in the cellar but Ben is convinced that it is a deathtrap and refuses.

While Karen continues to get sick, Ben tries to make plans to get her help. The men refuel Ben’s truck while fighting off the hoard of creatures who are outside, feeding on the flesh of dead people. As Tom and Judy try to flee with the truck, it explodes and they are both killed. Ben, angry at Harry for not helping, fights his way back inside where a news report tells the people that only destroying the brain can stop the reanimated dead. Also, the report tells that groups of armed men are now canvassing the countryside to restore order.

Now fearing for his life, Harry tries to wrestle gun away from Ben but is shot in the process and stumbles to the cellar where Karen has now died of her illness. The creatures being to attack the house, breaking through the windows but Helen escapes their grasp and goes to the cellar, only to find her daughter now eating her husband’s corpse. Karen then brutally stabs Helen to death. Meanwhile, Barbara spots Johnny outside among the creatures and is taken by them only to be eaten.

Being the only person left, Ben barricades himself into the cellar and is forced to kill Helen, Harry, and Karen who reanimate and attempt to eat him. As the night turns to dawn, Ben is encouraged by the sounds of the armed gunman who are clearing out the yard. Ben runs upstairs to greet them but is killed by a sniper who mistakenly takes him for another of the undead. The corpses of all the dead are then burned and it appears that, for the time being, the Night of the living dead is over.

I know that I gave the entire plot here but this film is from 1968 and anyone worth their horror salt has seen it at least once. Even though I gave away most of the plot, this is still something that should be enjoyed by everyone. It is filmed in black and white (although later digitally colored), and while it is a horror movie and was originally conceived as a horror comedy, this movie carries serious depth of character.

While all of the characters are decently acted, Duane Jones steals the entire film in his portrayal of Ben. He is smart and charismatic and, while conflicted, does not flinch from duty and purpose. Originally written as an uneducated man, Jones instead reworded and reinterpreted the character to be the intelligent, well-spoken man that eventually became the face of the entire film. He becomes our moral compass and our beacon of light and when he is accidentally extinguished, the film which already has been brutal, dark, and terrifying, becomes something else: somber. Whether this was the purpose of the end, I am not sure, but the emotion that Romero is able to elicit from the audience with the death of Ben is as effective as almost any other film I can remember.

The effects and minimal gore are incredibly effective when used, especially considering that nothing of this sort had really been seen on the silver screen before this. In fact, as this was before the MPAA could really control the rating system, anyone of any age could purchase tickets and the film was seen initially by young children and teenagers. According to Roger Ebert, the children were horrified and not in the fun way you desire from horror. Kids as young as six or seven where shocked and appalled, not just from the horror elements but from the downright tragic ending of the film’s protagonist.

This film launched the zombie genre which is incredibly interesting, considering the word zombie is never spoken in the film; instead they are referred to as ghouls. This is the first in a large series of Romero-directed zombie films, all with “…of the dead” in the titles. Also this film is the inspiration for slow, walking zombies, usually called Romero-style zombies, in written work as well as visual mediums. The film has such an important legacy that the Library of Congress selected it to be preserved because it is “culturally, historically, and/or aesthetically significant.”

Do yourself a favor and sit down with this film. Watch it closely as it is shot well and acted wonderfully. Become engrossed in the characters and suffer with the rest of us as the tragic ending comes to pass. Whatever you do, if you are given the chance to see this film, don’t pass it up. The trailer is cut in such a way as to feel like a classic drive-in shocker but I assure you that is not the case. This film is as good as it is important.