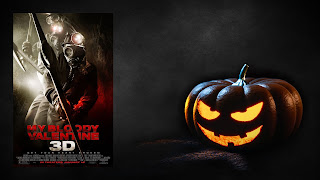 October can mean only one thing here at The DreamCage - it's time to count the days til Hallowe'en with David Ames' Hallow-vent Calendar of horror films! Day 28 is the 2009 remake of My Bloody Valentine ...


Read the review of the original My Bloody Valentine here.

Often times we are presented with films that, while on paper look like a great idea, usually turn out to be derivative and boring (Looking at you Truth or Dare). Sadly, a lot of the older movies that fit into this category then get remakes that are also atrocious (i.e.: Prom Night). Luckily, as hopefully we have shown in this year’s Hallow-vent Calendar, sometimes the remake succeeds and a fun, well-made film is presented to an audience already aware of the basic plotline. Today, we look at one of those films. This movie may not have the same nostalgia or camp factor that the original carried, but it does bring with it a respect for the source material. Today we look at Patrick Lussier’s 2009 remake of My Bloody Valentine.

The film begins on Valentine’s Day of 1997 when a cave-in traps six miners in the Hanniger mine located in the small town of Harmony. Only one man, Harry Warden, was recovered alive but he was surrounded by the other five men, whom he killed in order to conserve oxygen. The teenage son of the mine owner, Tom Hanniger, was blamed for the disaster.

A year later, Warden dresses in mining gear and a gas mask and murders numerous partying teenagers who have made the mine the location of their get-together. All are murdered except Tom, his girlfriend Sarah, and his friends Axel and Irene.

Ten years pass and Tom inherits the mine. After his decade-long absence from Harmony, he returns to find the town completely different. His friends have either moved on or, in Axel and Sarah’s cases, gotten married to one another. While Irene is busy with a rendezvous of her own, her date is murdered by a man in mining gear. The mysterious killer then takes out Irene and the Hotel Manager. When her body is found, it is discovered that her heart is missing.

Tom is considered a suspect until a mysterious box containing Irene’s heart appears at the sheriff’s office. Later, Tom is pursued by the killer but escapes and when he confronts the retired sheriff, it is revealed that Tom’s father and a few prominent men from town shot and killed Warden, burying him after his spree in ’98. When they go to his grave, they discover that Warden’s body is gone but one of the men who shot him is buried there instead, his heart also missing. I don’t want to give too much more away but I will say that you need to stick around after the credits to see a hidden scene that adds to the story and sets it up for a sequel that never came to fruition.

This film is so much fun. I absolutely loved the original and, while I am not sure this holds up to that, it is incredibly entertaining. If you like slasher movies, this is for you. It fits all of the necessary criteria for an ‘80s slasher flick: there is sex, violence, a small town with a shady past, and even a town official with secrets. It may be simply another film in a long line of the same but it is still executed wonderfully and, while there aren’t a lot of surprises, if you enjoy this type of movie, you genuinely won’t care.

Sadly, most of the actors and actresses are pretty forgettable in the film. They aren’t bad at all but they are simply props for the killer to chase and torture. The only real standout is a young Jensen Ackles who, like his Supernatural costar, decided in the same year to remake a slasher classic (Jared Padalecki was in the remake of Friday the 13th in 2009). Ackles is believable as Tom Hanniger and can play both the sympathetic victim as well as the smart and resourceful hero.

The gore was great as well, although I am partial to the original for the practical effects it used. The scenes are bloody enough to satiate the horror fan but not so disturbing that they would turn away the everyday filmgoer. Another interesting note is that My Bloody Valentine was the first R-Rated movie to be shot in the then new RealD 3D format which, when I saw it in the theater was actually pretty awesome. The murders and murder scenes were much more interesting in 3D. The only downside is that the filmmakers played that up with quite a few instances of stuff being thrown at the camera, which definitely takes a toll on the novelty.

Overall I would say that this is a rather successful remake. My vote is still firmly behind the original film and I think that this might have been slightly better if they simply would have used this chance to continue the original storyline. That being said, it was released in January, the month movies go to die, and still ended up being a commercial success, grossing $100 million on a $14 million budget. Maybe one day we will get another crack at this strangely satisfying series.