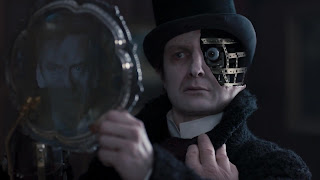 Our Doctor Who expert, Tony Cross, is journeying through all of time and space to bring us his thoughts on every available Doctor Episode. Today is the Twelfth Doctor adventure Deep Breath…

If you're new to these articles, then I should explain that what follows isn't a review in the traditional sense. That would involve critical faculties. It is a collection of immediate reactions, thoughts, ideas and bees in bonnets that pop up in the immediate aftermath of watching the episode. This will also contain spoilers so if you've not seen the episode then go and watch it and then come back. You have been warned. This article is based on the one I sketched out on original broadcast combined with some additional thoughts from tonight's re-watch.

Deep Breath launches the Capaldi era of Doctor Who and it seems that the story was designed to do a couple of things. Most importantly it is to introduce us to a new and older Doctor and the New Doctor Who audience's first experience of an older actor in the part. Even if Christopher Eccleston wasn't that much younger than Capaldi when he first took the role.

Hence a lot of the conversations Clara gets involved in with either the Doctor or Vastra are aimed at us, which makes her decision to leave the TARDIS before being reassured by the Eleventh Doctor's phone call a plea to the audience not to leave because this is still Doctor Who. Consequently, it is different to a lot of new Doctor's first stories, which just assume we'll pick up with the new Doctor and run with him/her.

The call at the end, emotional though it is, seems unnecessary. No other Doctor has required the previous incarnation to beg for his acceptance. And in a way, it's insulting to both us and Capaldi but perhaps I'm being harsh.

It's almost as if Steven Moffat doubts his own choice of Doctor.

There's also a mild dig at us the audience. The whole 'I'm not your boyfriend/You might as well flirt with a mountain/He wanted you to like him' stuff seems to be a criticism of our apparent need for a younger more fanciable Doctor. Even though it was Steven Moffat that chose Matt Smith and even though Capaldi has his fans too.

Then we have to re-boot Clara for her post-Impossible Girl future. She now needs to be a character not just an enigma and this story is designed to be a regeneration story for her too. It's just not as drastic. I'm not sure I've seen enough 'control freak' in Clara so far to justify the Doctor's accusations that she is one though.

Jenna Coleman's clearly a good actress so it would be nice to see her given more scenes like her confrontation with the Half-Face Man. In that scene, she gets to do the whole Sarah Jane Smith brave and scared at the same time trick. Indeed, I can't praise Jenna Coleman enough. This story - if we hadn't realised it already - shows what a fine actress she is. She wonderful in this. And seems to hit it off with Capaldi immediately. There's a real electricity between them.

As she's seen all the previous Doctors though you do wonder why she's so shocked that he's old but then perhaps she just assumed that they all started young and then got old. After all, what's the point in renewing yourself if you renew yourself older? It's counter-intuitive.

Which brings us to another thread in Deep Breath: where does the Doctor get his faces from? Or any Time Lord for that matter. Is there a database of faces? A Facebook perhaps. [I'll get my coat.] The Doctor's face thing - like the Doctor's name - seems to be a Steven Moffat bee in the bonnet because of casting Capaldi but I do think some of the best lines came because of this. I especially liked "Who frowned this face" and "It's like I'm trying to tell myself something." The face is going to be a thing. Let's see where it goes. If it goes anywhere.

Then there is Missy. Who is she and what's she up to? This being New Doctor Who we need a big season-long arc, don't we? Sigh. Do we though? Do we? Perhaps we do. Modern television series - or at least SF and fantasy ones - seem to have become moulded to the arc & the big season finale pattern. In the 21st century, a more radical television programme might just have a run of adventures that are simply fun without the need for us to see how clever the writers are? Or am I again being harsh? Perhaps the arc/finale structure rewards the loyal viewer, so we can make up our own theories as we go along, searching for clues in each episode and trying to tie everything together?

Quick diversion: title sequence and theme tune. Loved the new title sequence. Hate the theme tune, which sounds like it was played on a weird combination of elastic bands, bells and kazoo. The new series has never cracked the theme tune in my opinion but perhaps one day they will.

What of Capaldi himself? I think he's fantastic. He has an edge that Tennant and Smith didn't have. It's not darkness. It's just an acidity. A lack of botheredness about how people see him, which I like. He's able to do both the comedy and the darker stuff. I like the fact that we're left to decide for ourselves whether the Doctor threw the Half-Face Man to his doom or whether it was self-destruction. The last scenes give us a vulnerability to this new Doctor underneath his crusty exterior. So yes, I'm happy with Capaldi.

Oh, and do we really need all the hilarious Scottish stuff. The Doctor's been Scottish before and didn't seem to think it was a big deal. But then the showrunner then wasn't Scottish. RTDs gay agenda* has been replaced with a Scottish agenda.** Damn that McMoffat chap.

I'm less happy with what's happening with Vastra, Jenny and Strax. All three are brilliantly performed but Strax has become only comic relief. I'd like him to have a bit more edge. I also wish Steven Moffat would have had the courage to give Vastra and Jenny a proper kiss without having to give them a 'breath' excuse. The Paternoster Gang are great when used properly but not when they're just there to provide some exotic sexual background and dumb comedy. Use them better Mr Moffat. Use them better.

So after all that rambling, I should say that I really enjoyed it. It's lifted by the brilliance of Capaldi and its excellent design. Doctor Who looks great these days, although Strax's disappearing bucket seemed to skip someone's attention in the edit.***

* There was no gay agenda.

**There isn't a Scottish agenda either

***Or it'll turn out to be a key thing in the forthcoming story arc. The Bucket of Rassilon. Or something. [It won't.]