Doctor Who - Into the Dalek 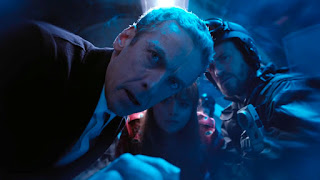 Our Doctor Who expert, Tony Cross, is journeying through all of time and space to bring us his thoughts on every available Doctor Episode. Today is the Twelfth Doctor adventure Into the Dalek…

I found Into the Dalek rather entertaining.

I know you could pull it to death by focusing on all the stuff it borrowed from elsewhere. From Dalek*, from The Invisible Enemy, from Fantastic Voyage and so on but equally I'm gob-smackingly surprised it hasn't been done before. Surely this is the idea that everyone must have had. And yet it took until 2014 for someone to get around to doing it.

I fear 'originality' is a stick to beat many a Doctor Who writer or showrunner to death with. It's as if Doctor Who was entirely original from 1963-1989 and never borrowed from other sources. Or from itself. I mean Terry Nation wrote virtually the same Dalek story time and again, although I'm not sure ripping off yourself is entirely unfair. If you have a good idea why not hammer at it again and again. After all, Robert Holmes wrote The Caves of Androzani twice. It's just the first version was called The Power of Kroll. Doctor Who has always been a magpie television series and without undertaking a proper scientific review I'd wager that genuinely original stories are few and far between. Mostly Doctor Who picks up something and metamorphoses it into something distinctly Doctor Who. So, I'm not quite sure lack of originality is as bad as all that.

It's a tale of morality. The Doctor's morality, which is to be a thread in this season as we deal with a Doctor who is a lot less comfortable than we're perhaps used to. Is the Doctor a good man?

It's a big question. I think we like to find a Doctor that fits our own image and the Doctors of new Doctor Who have certainly been less ruthless than the Classic Doctor could be. Or at least has always made more of a big deal out of his morality, which makes the scene here where he uses a soldier's impending death to find an escape route ice-cold shocking. No 'I'm so sorry's' etc. Just 'this man is going to die but I'm going to save everyone else.' It really does feel different this time.

He's still finding his way this new Doctor. He's clearly not the man he was. There's a ruthless streak of logic, sharp snark and a lack of neediness about this new Doctor. He doesn't have the time to care about whether people like him or not. He is just going to do his thing.

I love Capaldi's take on the part so far. He's such a brilliant actor. Indeed, I'd go as far as to say that he's the best actor to play the part since Troughton. Not necessarily my favourite Doctor. Yet.

Then there's Jenna Coleman's Clara. She's developing a character, which is nice. Now she's not a puzzle for the Doctor to be solved. The Moff gets a lot of criticism for the way he writes women characters in Doctor Who and the Doctor makes one or two unnecessarily snide comments about Clara's appearance that veer dangerously too close to 'banter' for my liking (although I was reminded of the Fourth Doctor's digs at Sarah Jane in The Ark in Space whilst they were crawling through the ducts). Anyway, I thought Clara / Coleman was great in this.

One caveat: I didn't like the slap. It was too serious. And physical violence as a form of communication is not something I want to see Doctor Who normalising. Would we have found the slap acceptable if it had been from the Doctor to Clara? No. So, let's not have it be acceptable at all.

I also liked Clara's initial scenes with Danny Pink (Samuel Anderson). The Clara-Danny thing is endearingly awkward, which I like. I get the impression that Steven Moffat would quite happily write a sit-com revolving around those two. Danny Pink is another teacher at Cole Hill School. He's an ex-soldier with a secret. He's also got one of the best and brightest smiles I've ever seen. It seems the Clara-Danny thing is going to be a 'thing' for the whole season, so it is early days for judgement, although when has that ever stopped me

The soldier thing is going to be another thread in a season of threads I think. Along with Missy, who makes another appearance here. Ah, Missy. The face that launched a thousand theories. When I watched this on the first broadcast I had many theories about who Missy would turn out to be. I think I was wrong about my initial guesses, but I can't remember at this distance. It does seem that Steven Moffat is confident that the Missy pay-off is worth her regular appearances, although it does have a touch of the Madam Kovarian about it.

[There's me ignoring my own earlier paragraph about the dangers of whinging about originality. I'm such a hypocrite.]

Where was I. Ah, the soldier thing? Yes, the Doctor dismisses Journey Blue (Zawa Ashton) at the end when she asks to come along with him by saying he doesn't like soldiers. I'm assuming that's just this Doctor because the Eleventh Doctor was quite upset when he found out that his soldier friend Brigadier Alistair Gordon Lethbridge-Stewart had died. But it's a new Doctor. I suspect his judgmental approach will come and bite him on the arse before the season is out.

Oh and Danny Pink and Journey Blue. Is this colour thing also going to be a 'thing.'** How many 'things' can Steven Moffat get into a single season and still tie them all up neatly? How many of them will be - and forgive me - red herrings? Doctor Who fans - always finding patterns in things that aren't there.

The other thing I want to mention - apart from Michael Smiley's appearance as Colonel Morgan Blue - is Ben Wheatley's fab direction. He manages to make the Daleks look menacing. I particularly like the shot of all their blue eye-stalk lights coming out of the darkness

And Rusty the Dalek gets a fine line in snark, which is unexpected in a Dalek, so this might be a good time to hand out some well-deserved praise for Nick Briggs whose Dalek voice work reaches impressive heights in this story. The slight change in emphasis between the 'good' Rusty and his return to Dalekness is rather brilliant and subtle.

Next up Robot of Sherwood which looks whimsical. And there's not a lot of love for whimsy in the Doctor Who fan world. Me, I'm a big fan of whimsy. Lord Peter included.

*I listened to Big Finish's The Genocide Machine today too and that's got similarities with this story thematically too in terms of what happens when a Dalek changes.

**I'm pretending that I don't know how this all pans out. Assume I've never watched the rest of the series at all.