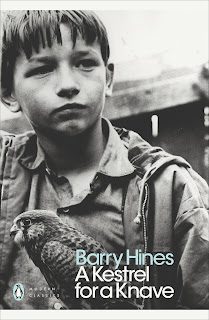 For our theme day, Marc Nash remembers a book and a film that introduced the world to one boy and his kestrel...

In 1968 I was four years old. Ten years before I picked up my first serious book, after a childhood of Asterix and Tintin and not much else by way of literature. And yet the seeds were sown by watching a 1969 film based on a 1968 novel (fast turnaround then and speaks to the instant nature of acclaim for the novel). The film was called “Kes”, directed by Ken Loach; the novel “A Kestrel For A Knave” by Barry Hines.

The word ‘knave’ has two meanings; that of a prince, as the ‘Jack’ cards in a playing deck are also called ‘knaves’. But it also has the meaning of a young person of poor moral behaviour. The genius of this book is how the older characters such as his brother and his sports’ teacher are the knaves, while protagonist Billy Casper’s knavish soul is elevated by the relationship with a bird that in centuries past might have been part of royal falconry.

A decade on from the ‘Kitchen Sink’ dramas that brought us books, plays and films about the working classes, such as “Room At The Top”, “This Sporting Life”, “Saturday Night, Sunday Morning”, comes one of the first studies of a working class childhood. And it’s brutal. Billy has to share a bed with his bully of an older brother, there’s an uncomfortable scene when the brother comes home on a Saturday night drunk out of his box. Billy has to light the fire to warm the house before going to school and there’s rarely anything in the fridge for breakfast. The book starts with a description of the closed curtains and there is a sense of these curtains into a working class house being flung open for us to have a nosey into. But the family screaming matches are played out on the front step for the whole street to witness.

The harshness doesn’t end at the garden gate, for school is equally hard on Billy. A boy with little application and on the point of ‘graduating’, with little prospects either. In English class they are discussing fact versus fiction and the teacher asks them all to write a tall story. Billy writes a bathetic, wishful thinking story about having a complete, loving family. However, it’s when challenged in class to talk about something he does in great detail that we get a glimpse of an alternative, redemptive path for Billy. He describes how he captured a young kestrel and trained it through a mix of a stolen book (Billy is no angel) and his intuition. Through his patience and love and they form a bond as deep as any human relationship which Billy lacks for elsewhere in his life. His teacher comes to watch a session with the bird and is suitably impressed by Billy’s dedication and imaginative powers to have tamed the bird under his own resources.

But the family violence prevails and we’d have to describe the book as a tragedy for its ending. This is such a powerful tale of hope against the odds, but of course what it is most likely remembered for is the school football scene. It’s written comically in the book, but of course on film it is elevated into one of the iconic scenes in British film history. Brian Glover plays the sports teacher, who rather than just referee the game (he has a whistle around his neck), turns up in freshly pressed Manchester United kit, picks himself as one of the captains of the two teams and plays with all his bulk knocking the kids off the ball such is his deluded will to win a match of utter inconsequence. He truly is a monster in the vein of Alan Partridge. Glover himself was a teacher in real life before turning to acting, but more improbably, he was also a professional wrestler, gurning for all he was worth and giving evidence of his natural comic timing as an actor-to-be. The sound quality isn’t great and the Yorkshire accents of the kids is almost impenetrable, but I do advise you to watch the classic scene below. If you’re interested enough to see Glover in the wrestling ring you can see him here.