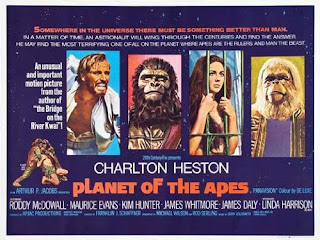 Kraig Taylor-Bryant discovers that films did exist fifty years ago and watched the original Planet of the Apes...

So, after finding out the theme for today, I decided to look into films of the 60s era and I was surprised and intrigued to find the first, original Planet of the Apes film on the list of films for the year. Now I’m not a big fan of the Planet of the Apes franchise, but I’ve seen enough of the films to understand that it has become more and more mainstream over the years, following its success, so it just seemed right to look into where the success started.

As I was watching this film, I already noticed early on that this wasn’t at all the same as any typical mainstream film of today, but it was different in a good way, because it meant I got to realise how films have changed to be tailored towards new audiences, and how the audience of these films have changed over the years in general. The film seems to use a style that I’ve noticed in many older films during this time and that is to do with the pacing of events; the film’s action escalates more towards the end of the film, rather than throughout, as we’re used to seeing in usual mainstream films such as Marvel films, or even DC films nowadays.

The film focuses on, mostly, character and “world building” early on in the film, giving us an idea of what’s going on, what exactly has happened before the events of the film (that being that the main characters have been travelling in a stasis of sorts for 2000 or so years on a space expedition) and giving us an idea of the characters in general and what their purpose is on this mission. Most of the people on this mission were intended to participate to simply find another planet with life on, with the one female on the expedition being included, we learn later, for the purpose of helping the human race reproduce. This kind of gives us an idea of how our ideals have changed over the years, for the better, on how both genders are now presented in films, with strong female flicks like Oceans 8, Ghostbusters (the remake) and Wonder Woman to support this claim.

Two of the other characters of the film are given a background briefly, with the main character, George Taylor (Charlton Heston), expressing his belief that there “has to be something other than man out there”, with another of the team, Landon (Robert Gunner), being guessed by George to have gone on this expedition seeking fame, making us care a little less about this character, but also showing us one of many forms of thinking that man can have. I think it was this that hints first that man can have greedy intentions, which helps us to change our opinions of who the real villains of this film are, right up until the final act. The idea of man having darker intentions is also highlighted in the main character at points in the film, with both one of the quotes that he makes, along with his actions towards the end of the film. One of the things he says after seeing the less evolved humans of the world, is that “If that's the best there is around here, in six months we'll be running this planet”, which not only seems rude to less evolved beings, but also shows man’s desire to take over/control areas which don’t belong to them, which we do see in history, with how people came over to America and fought those that were native to the country. This again shows another negative side of man, with the fact that, later on in the film, Taylor seems to be a lot more violent towards the apes, even going so far as to take one of them hostage. 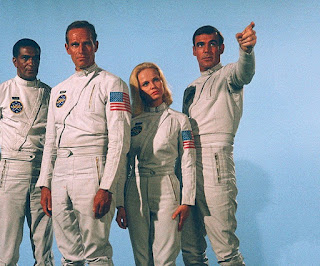 I did notice that one of the characters did not have much elaboration to his story, and that is the character of Dodge (Jeff Burton). He is a prominent black character for the first act of the film, with him helping to find the first sign of life during the story, though despite this, he mostly is there to serve as part of the group, instead of being a main character (with moments when he is not part of certain conversations that make this clear). This kind of shows what people’s way of thinking was at the time, and reminding us of how things have changed, with characters from famous shows having people of different races featured more prominently, such as in Doctor Who and, most notably in recent films, in Black Panther. This became clearer to me when Dodge wasn’t involved in conversations between the characters of Landon and George, as well as the fact that he gets killed first, a common cliché that sometimes still happens to this day, though happens less often than it used to.

One other character that I found particularly interesting was Dr Zaius (Maurice Evans), one of the superior apes of the planet, compared to the less evolved apes (humans). I found many of his quotes to be extremely interesting, because when George threatens the doctor, telling him that he knows how to use the gun that he’s holding, the doctor simply responds with: “Of that I'm sure. All my life I've awaited your coming and dreaded it.”. It was quotes like this that made me start to believe that maybe man has done something terrible on this planet to make the doctor believe this, and also made me think that maybe man is a violent race in comparison to other beings of our own planet, especially when you compare us to animals that hunt for their own survival, whereas some humans hunt for the purpose of enjoyment. I also recognised that he also says in one moment of the film, that “man has no understanding”, which interested me, not because he was calling them unintelligent, but because it could also mean that man does not seek understanding with others, and instead always turns to violence.

After the main plot twist was revealed, which is what really amazed me, that the planet that the humans were visiting was actually Earth in the future (as the ship was actually returning home after all these years) I realised that what’s good and what’s evil is a very grey area in this film, because the superior apes of this planet seemed to commit some unspeakable actions, such as killing some humans and imprisoning others. Though, after comparing them to ourselves, I realised how in some ways we are very similar to them, except for the fact that they don’t seem to be waging wars on their own people. It was in this moment that I realised that, from their perspective, we are a very violent people, though I don’t think that’s because man in general is violent, but it’s because of an instinct of survival that sometimes makes us turn to killing/domination over other means, and, like I’m sure is the case with these superior apes, not all humans are like this. However, in the moment where we realise that it was humans who ruined the planet, we start to understand our potential future if we’re not careful, and that’s what I think makes this film extremely relevant even today, because at the end of the day, we are all human and should prove ourselves worthy of being the intelligent beings before we wipe ourselves out, leading another superior race to take over, like what has happened in the scenario that was explored in this film.

In general, I think that this film was extremely clever in making us recognise the dangers of the human race, but also what all beings are capable of, and what we should aspire to rise above, in the sense of being better than them, by perhaps treating inferior beings that are also intelligent, with more respect and care. The development of the characters and themes, I think, is what’s made this film better than the newer instalments of the “apes” franchise, and explores many areas that I think the new films maybe should have explored a little more too. The original Planet of the Apes may have taken longer to escalate in terms of its climax, but when it does so, it definitely makes the whole film worth watching, and is a film that has inspired me to watch more of the films released during the 60s.