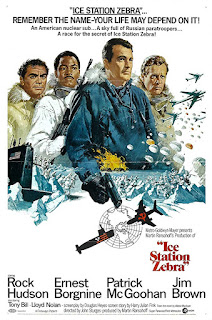 As we celebrate the year of our Susan, 1968, Steve Taylor-Bryant casts his eye over the tense Cold War thriller from the pen of Alistair MacLean Ice Station Zebra...

I had a lot of fun poking Susan with the age stick due to her being only slightly older than me in my What If? article, but I really did like the 1968 original of Ice Station Zebra and it deserves more than a joke article to remind folk that Susan is old. Written for the screen by Douglas Heyes and Harry Julian Fink and based on the incredible novel by Alistair MacLean, Ice Station Zebra is a fantastically tense Cold War style espionage movie that hides a message of hope underneath its military bravado. Directed by the sheer brilliance of film-making that was John Sturges (The Magnificent Seven, The Great Escape), Ice Station Zebra very nearly holds up today in both plot and execution. It’s only a few of the ice storm scenes that really date the movie's aesthetic and, if you didn’t know who Rock Hudson or Patrick McGoohan were, you’d struggle to age the film at all. Some of the model work and cinematography is just stunning and it's no surprise watching Ice Station Zebra now that its garnered Oscar nominations for Daniel L. Fapp’s cinematography, and for best visual effects, of which there are many, and, for the era the film was released in, I can’t remember many better. Nowadays you’d probably decamp to Iceland or somewhere to film, but to make Ice Station Zebra in a studio back then I think was a remarkable job.

Whilst starting the film with shots of a Russian satellite might be a go-to trope of spy films during the Cold War era, for Ice Station Zebra’s final scene to work it sets up the plot very nicely and from space to its crash landing in false powdered snow scene, we jump to Scotland where apparently everyone owns a Mini and Rock Hudson likes to drink whisky with Lloyd Nolan. Nolan of course is Admiral Garvey and he gives Hudson’s Commander Ferraday strange and top-secret orders that involve Ferraday taking his nuclear submarine, the USS Tigershark, from its mooring in Scotland to the Arctic to rescue the crew of a weather base named Ice Station Zebra that has come under trouble. With raging polar storms and drift ice it is impossible to mount a rescue by air or land so sending in a submarine is the only way. On his crew though Ferraday must take a mysterious Brit, David Jones (Patrick McGoohan), along with a battalion of US Marines under the stewardship of Lieutenant Walker (Tony Bill), and after they have set sail they must resurface at a strange destination and pick up a Marine Captain that nobody has heard of, Captain Leslie Anders (played with some genuine looking menace by Jim Brown) and a Russian by the name of Boris Vaslov who is actually working for the allies, portrayed here by Airwolf co-pilot Ernest Borgnine.

No one trusts anyone, especially Ferraday who doesn’t know the complete mission brief of Jones, who doesn’t particularly like having a Russian on board, and can see that the Marines, Walker especially, don’t seem to trust Anders. When they get near their destination the sub tries to break through the ice but cannot quite force its way to the surface, so it is decided that they will fire a test torpedo through the ice and then surface. Problems occur when it's discovered that the torpedo hatch has been sabotaged and is open to see both ends. This floods the torpedo room, kills a naval officer, injures many more, and nearly sinks the submarine with only some brave piloting from Ferraday and some serious luck not leaving them at the bottom of the ocean, or worse, in a nuclear meltdown scenario. Eventually they manage to get through the ice and a ground party, Ferraday, Vaslov, Jones, Walker, and Anders amongst them start the trek towards Ice Station Zebra’s last known location. Upon discovering the weather station, they notice a great fire has ripped through the camp and whilst some of the staff and scientists are still alive, many including the characters of Helliwell and Dr. Goodwin are dead.

This is were we learn the importance of the Russian Satellite that crashed in the beginning. It contained a module that had a British camera on board taking photographs of military bases onto an American film, and it turns out Goodwin was a Russian spy trying to retrieve it, and Helliwell was one of Jones’ men also tasked with securing the inflammatory evidence. Goodwin had killed the men and set fire to the base but had hidden the module first. Whilst the submarine crew tend to the survivors everyone else looks for the film. Vaslov it turns out isn’t as anti-Russian as he had made out and when Jones finds the transponder to look for the capsule he is attacked by Vaslov, who then tries to make it look like Anders is the spy. Before Ferraday can stumble upon the scene Anders is shot by an injured Jones and to everyone else Vaslov looks innocent. Unbeknownst to anyone Ferraday pockets a Russian detonator. Russian planes suddenly appear overhead as the weather has cleared and Russian soldiers under the command of Colonel Ostrovsky (Alf Kjellin a Swedish actor) parachute down and surround the base. A stand off occurs with Ostrovsky threatening extreme violence upon the stricken men and unprepared submarine crew if he isn’t given the module to return to Russia with. His mission is for evidence of Russian military bases to never fall into the hands of the enemy. After deciding the best course of action is for Ostrovsky to get his way, mainly due to a fire fight between everyone, a truce is declared. Ostrovsky is relieved that Ferraday has returned the Module and he ties it to a weather balloon to picked up by a Russian plane overhead, except Ferraday still has the detonator and explodes the module leaving no side with incriminating evidence against each other. There is a peace and unity after the act and with the positive press worldwide about the rescue, a hope that two enemies can become friends.

There was a lot to love about MacLean’s writing and Ice Station Zebra was always an excellent book that, in the 1960’s, didn’t perhaps lend itself as obviously as maybe it does now to the screen. Having a story end with a hopeful message of friendship between the Russians and the Americans was made more in hope than expectation I am sure, but to still include it in a major release at the height of American hatred towards Russians was a brilliant and brave decision from all involved. Casting wise the film was impeccable. Rock Hudson has all the charisma needed to carry a film on his own and looked and sounded the part of Commander Ferraday, even the technical gibberish when sailing the submarine seemed convincing. McGoohan is an actor I have always loved, and his portrayal of the ultra-British, smarmy git David Jones was an utter joy to watch. But it is Ernest Borgnine I have the most respect for. Playing a Russian in the 1960’s was never going to be easy and at no point did I feel his character disappeared into some political stick with which to beat the audience, he played Boris Vaslov as fairly as I would expect the character to be played and his accent was not as bad as some actors I’ve seen trying to carry off Russian spy.

What Sturges and all involved did was take a complex spy novel and make a very watchable film. The plot played out nicely, it was cast incredibly well, and it looked beautiful in places with effects that for the time were magnificent. But it achieved real emotions from the viewer when watching it, through its pacing and its score, especially when the submarine is under the ice. There is a long time with visuals of sub quite stranded with no way up, accompanied by some incredible sound effects and a wonderful score that left me with an overwhelming sense of relief when they finally made it and the film is littered with these glorious moments. Of course, in a day and age when money and CGI technology are so easily available it maybe doesn’t hold up as well as it could, and some snow scenes are obviously studio filmed, but there is some where even today you must think how they achieved them as they look so real. 1968 was a good year for films if Ice Station Zebra is anything to go by.