Book - The Age of Exodus 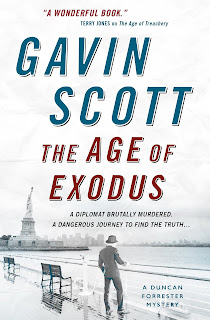 Tony Cross embarked on a journey across history and read The Age of Exodus by Gavin Scott, thanks to Titan Books...

The Age of Exodus is Gavin Scott’s third book in the Duncan Forrester mystery series, which has been an entertaining trilogy so far. [Read our reviews of The Age of Treachery and The Age of Olympus - Ed]

Duncan Forrester is a Fellow in Archaeology in Oxford. He’s a man with a hinterland. An SOE agent during World War Two he isn’t just a brain in a jar. He’s a man capable of action too. It is possible that he bares a small resemblance to Indiana Jones, although less likely to wield a whip. He’s also a man of lost loves. His war service and his lost loves become loosely entwined in this story.

We begin when Forrester is called in to investigate some threats aimed at a minor British civil servant that purport to come from a Sumerian demon, which it must be admitted is odd. Unfortunately, Forrester’s investigation has barely got started when terrible things begin to happen. Is there a Sumerian demon out there with a grudge or is it the cover for a more human villain?

Being a novel, of course, this can’t be the only issue confronting our hero. Oh no. There is Foreign Secretary Bevin’s involvement in the Palestine situation, an attempt on Bevin’s life – which is based on a real incident - and Forrester’s experience training Jewish soldiers makes him the ideal man to travel with Bevin to New York as a ‘spotter’. By sheer coincidence – or is it? – this trip ties in with Forrester’s Sumerian demon issues. Are the connected? Is there real magick going on? Or is something else entirely?

Gavin Scott writes with a driving clarity that makes this something of an entertaining page turner. He’s also – and Mr. Scott please forgive this comparison – a good Dan Brown. He’s done a lot of research. You’ll learn some interesting facts as the adventure goes on around you, but he knows when to stop info dumping and get on with the story, unlike Dan Brown.

This book, like the previous ones, also does a great job of weaving real people into the story. We get Bevin, Arthur Koestler and Aleister Crowley pop up and do their thang. And in The Age of Exodus the story also ties in with real life events – the foundation of the state of Israel. In these days of rolling anti-Semitism and the use of ‘Zionist’ as an insult, that sits on shaky foundations and can be misused both unintentionally and intentionally it makes for a surprisingly contemporary political point (although whether Scott intended that or not I don’t know.) He’s certainly fair to both sides here I think or tries to be, although we – The British – don’t come out of it all particularly well but then that’s history for you.

Anyway, this is a good, well-written page turner with a dash of real-life in it. If you don’t find yourself looking up people and places as you read (or when you’ve finished) then I’ll be a little disappointed. Here’s hoping for more Duncan Forrester stories.