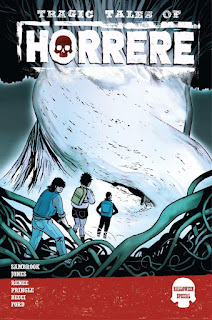 With the new Collected Tales of Horrere Kickstarter going live last night, here's why you should throw much money at it with a reminder of Susan Omand's thoughts on last year's Halloween Special of Tragic Tales of Horrere from Little O and Madius Comics...


You know when you were a kid and you used to lie in bed at night reading comics, buried under the blankets with a torch so that your folks wouldn’t realise you were still awake and start shouting at you to go to sleep because you have school in the morning? That’s the same feeling I get reading Tragic Tales of Horrere. The stories are always just the right side of spooky with engaging characters and intriguing plots to keep you turning the pages well into the night, in defiance of your parents, so I was really looking forward to seeing what their Halloween Special had to offer. From the heartfelt dedication to those passed at the front to the true agony of the agony aunt letters at the back I was not disappointed.

Three tales grace the pages of this issue. First up is The Quiescent and another meeting with a character who first graced the pages of issue 1 – The Professor! A while after his encounter with The Aufhocker, which has left his attention a little less than sharp, he has been invited to dinner at the home of his friend Terrence to examine a strange new artefact but things are not quite what they seem. Can I just say from the outset that Joe Becci’s art for this is absolutely amazing! The levels of detail, the subtlety of line and the beautiful gradations in tone make each separate panel a pencil study fit to grace any wall in its own right. The story, by the Madius stalwarts Jones and Sambrook, works well for what it is and their trademark humour shines through the darkness. The character of the Professor, with his newly acquired absent mindedness, is very well observed and his “voice” in the narration is strong but, as always with The Professor’s stories, I’m left wanting more! The Quiescent feels like an episode in a part-work rather than a complete tale in my view but that’s not really a bad thing – I can always hope for more to be added to what is fast becoming a Horrere favourite for me. A tiny point to note though is that I found the Old English script used for his journal entries a bit difficult to read on a smaller screen until I got into the swing of it but that is a minor quibble.

The second story is a strange one indeed but in all the right ways. The guest story Octopus and Raven, written and drawn by comics debutant Mat Pringle, manages to say so much without spelling it out. It feels like a folk tale, a myth or legend, a supernatural tale passed down through the ages and I could smell the sea and the pines, hear the wind and the waves, as if it was part of a dream or a nightmare. I really hope Mat continues to make more comics even if, as it says in his bio at the front of the comic, they are “a right bastard” to do.

The final story in the book, Do You Want to See, is again from Jones & Sambrook, with art by Alexa Renée, and it is really clever in its construction. Young Will tried to get his friends, Grayson and Sara, interested in an old letter he found in a dusty book. Instead they all end up going out to the woods to explore. Flashback to two highway bandits from centuries before, in the same woods. They are trying to get away from their latest crime and come across “a strange tree thing” in one of their shortcuts. Cue Will and his friends finding the same strange monolith as they explore, and that’s where this story is so clever. The plot is a single continuous timeline from two different times, never overlapping or repeating but happening exactly the same way centuries apart. It’s difficult to explain without you reading it so just take my word for it (then read it!), it’s a brilliant concept and a wonderfully creepy story too.

So there we have it. The team have delivered yet another masterclass in the macabre. Three scary stories, all completely different and all definitive of Horrere. Not as gory as their last issue but the Halloween Special definitely makes up for it in creepiness factor, especially with Do You Want to See, and will satisfy fans of all different brands of horror. I just hope we don’t have to wait til next Halloween before the return of Horrere.

Welp, it appears that we DID have to wait until the next Halloween to hear from the Horrere gang but with good reason. They've just launched their Kickstarter to raise funds to collate all three Horrere goodies AND the one-shot of Laudanum into one shiny new trade paperback! We've read them (See Steve's review of issue 1 and my review of issue 2) and *spoiler* loved them so what more reason do you need? Oh, you need more reason? OK what about exclusive stickers, bookmarks, prints and T-shirts to go with the comic? Ahhh see, now you're paying attention.  So go support the Horrere Kickstarter NOW at http://kck.st/2OWofS9 - it's going to be SPOOKTACULAR!