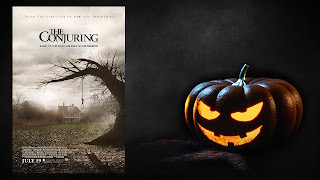 October can mean only one thing here at The DreamCage - it's time to count the days til Hallowe'en with David Ames' Hallow-vent Calendar of horror films! Day 30 is ALL The Conjuring universe films so far ...


I wanted to close out the month this year with something a little different. Instead of a singular film today, I want to talk about a growing universe of films. James Wan has become the staple for modern horror, gifting us with two franchises which have grossed a ridiculous amount of money: The Conjuring and Insidious. Today, I want to give a quick talk about each of the five films in The Conjuring universe.

The first film on the list would be 2013’s The Conjuring. This film, based on true events witnessed and recorded by famed Demonologist and Medium couple Ed and Lorraine Warren, is thrilling and reignited the horror market in an unprecedented way. The film follows the events surrounding the haunting of an old farm house purchased by the Perron Family. Strange things begin to happen including clock stoppages, strange sounds and smells, and eventual poltergeist activity, all building to full scale attacks on the family. The Warrens come to investigate and must not only save the family but also perform an exorcism on the mother who, possessed by the spirit of a witch who murdered her child and killed herself in 1863. This film is amazing, easily one of the best horror films in the last 25 years. It is a slow-burn in the beginning, harking back to classics like The Amityville Horror but building to a crescendo more akin to The Exorcist.


The next film in the series is 2014’s Annabelle, which shows the history behind the true story of the haunted doll shown in the beginning of The Conjuring. In this film, John and Mia Form are expecting their first child and as a gift, John gives Mia an incredibly rare doll to add to her large collection of vintage dolls. One night, two members of a cult break into the house and infect the Annabelle doll with the vengeful spirit. The Doll wreaks havoc on Mia especially, in scenes similar to Rosemary’s Baby. Eventually the mother must find a way to get rid of the doll for good, utilizing the help of a local bookshop owner as well as a priest, to ensure the safety of her newborn child. This film fell flat for me at first but grew as I re-watched. It isn’t perfect and at times feels derivative of other, more successful films, but overall it is a decent entry into the genre.


Next would come the direct sequel to the first, 2016’s The Conjuring 2. This film once again focuses on the Warrens, but this time they are called to the home of a British family, the Hodgsons, to investigate what is known to the world now as the Enfield Poltergeist (another true story). The film opens with the Warrens investigating the Amityville Murders (as they did in real life) and shows the horrific effect that this has on Lorraine. The film then follows similarly to the original Conjuring in that the Warrens must help to protect and exorcize demons from the home. We also get to see a spirit which has been coming after Ed for years, the demon Valek, who wears the habit of a nun. This is a great film and is on par with the original in quality. While these films do utilize jump scares, they also pepper in enough psychological horror to truly leave a lasting impression and this film is no different.


After the success of the first three Conjuring movies, the studio decided to do a complete origin for the Annabelle doll and we were treated to 2017’s Annabelle: Creation. This film begins as famed doll maker Samuel Mullins creates the doll that will eventually be possessed by Annabelle, his daughter. The girl is killed in an accident and in the depth of their sadness, Mullins and his wife use a spirit board and ask Annabelle to come into the doll and stay. They then learn that Annabelle is not really their daughter but instead a malevolent force that used her visage to gain access to the material world. The film actually focuses on the orphaned girls and the nun who are allowed to use the Mullins house as an orphanage. It begins happily but very quickly things shift as the doll is discovered and the spirit of the demon inhabits one of the girls, putting the rest at risk. The way in which this film ties into the first Annabelle is amazing. I personally like Creation more than Annabelle because it feels less derivative and psychologically is much more effective.


The last film to be released in the Conjuring universe as of today is 2018’s The Nun, a further explanation of the demon from The Conjuring 2. This film begins at a Monastery where something evil has escaped. One nun is taken by the force while the other kills herself to stop it from escaping. The film then shifts to an investigative priest sent to the monastery to investigate. He acquires the help of a young woman in training to be a nun because she is known to receive visions and it could be very useful in their quest. He and this young woman travel to the monastery where they discover a group of sisters praying constantly to keep some sort of evil at bay. This creature stalks the halls of the monastery, creating fear and paranoia wherever it roams, at one point even burying the priest alive. As this film is brand new, I don’t want to give too much about it away but I will say that much like the rest of the universe, the Nun ties wonderfully into the other films, especially the original Conjuring movie. While this film relies heavily on tropes from the Monster movie genre, it is a solid entry into a growing franchise. It is well acted, shot perfectly, and has the right amount of creep and jump to keep you on the edge of your seat.


Over all, if I had to rank the universe from best to worst, it would probably be:

This series has such great potential and every one of the films in the universe is worthy of a watch or two. Hopefully Wan is able to launch a third Conjuring movie as well as follow through with plans to create a film based on the Crooked Man from the Conjuring 2.