Film - Above the Clouds 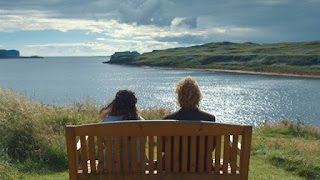 Susan Omand does some blue sky thinking as she watched Above The Clouds, on recently at Raindance Film Festival...

On her 18th birthday, headstrong and artistic Charlie makes a startling discovery. The man married to her mother, isn't her dad. Recruiting Oz, a rough sleeper whose only possession is his driving licence, she embarks on an epic road trip from Margate to the Isle of Skye to track down her biological father. On the journey they both learn more than they bargained for - about themselves, each other, the importance of family, and why (sometimes) there really is no place like home.

Like the conversation that Oz (“like the Antipodean land mass”) and Charlie (“like the over-priced narcotic”) have about the interesting pair of paintings in the gallery when they first meet, I thought this was a film of contrasts but, for me, the contrasts were that some bits worked and some bits didn’t.

For the bits that worked, Oz (Andrew Murton) and Charlie (Naomi Morris) have to come top. Separately they were both great with very likeable characters anyway but together they were magic. Their on-screen bond of friendship felt incredibly real without being corny or the plot needing to head into weird romantic stuff, it was a purely platonic, fun and caring buddy relationship, just perfect for this kind of road movie. The rest of the casting also worked really well for me, with special mention for both Ian Bustard, whose character I could have watched for much longer, and the ever-delightful Gordon Kennedy, whose work I love anyway and is wonderful in everything. There’s another character, or should I say CAR-acter that deserves a mention here, a little yellow Fiat 500 which was a perfect choice for the film, adding its own spark of personality against the stunning backdrop of the Scottish Islands as well as my personal favourite scene of the whole film, when you see it in a longshot, tootling along the seafront at Margate as Charlie and Oz set off. That just made me smile at the anticipation of their adventure. Talking of adventure, every good expedition needs a map (you know the kind of thing, like in Indiana Jones where the aeroplanes fly in straight red lines over countries) and whoever thought of making the map an art installation, with the car as a keyring being hauled over a mixed media landscape collage on a piece of string, was utterly inspired!

So, if all that was good, what didn’t work? Well, there were niggly nitpicky things that annoyed me like plotholes, leaps of faith and clichés in the writing, even though the humour was good. Charlie’s dads both grated on me as characters and there were some scenes where unintentional lapses broke my concentration, such as being able to see the crew car in some camera angles in a scene in a supposedly deserted layby. Like I say, just minor niggles mostly. However, there were two things that really stood out as problems for me. The first is something I alluded to in my good points – I could have watched some characters for longer. This is a very short film, barely scratching the 90-minute mark, and there were a LOT of supporting cast in it, so much so that it felt rushed as Oz and Charlie almost hurried from meeting to meeting with each minor character. As such it also felt, to me, like these “meetings” were a string of separate vignettes or chapters rather than a single flowing story and this made the film seem a bit disjointed. Adding in an extra few minutes to slow the pace or allowing some overlap, like allowing characters from one scene appear in the background of another, would really have improved things for me. The other issue I have with the film is the ending, especially the way Charlie’s story tied up. I’m not going to spoil the film to say what happens but it hit all the wrong notes for me, just really annoyed me, and the last 2 minutes especially were such a let down on the cliché front. If I was going to watch the film again I’d skip the final bits and just leave them sitting on the bench looking out over the water with the last words being “Haven’t you got a home to go to?”

So did the good outweigh the bad? If it wasn’t for the way Charlie’s story ended I’d say yes but that ending really did spoil it for me. Don’t get me wrong, the film is still worth a watch, it’s a fun way to spend an afternoon and you might get more out of the “family” aspect of it than I did. There is only one thing I’m left wondering now – who did those paintings? You can see them in the clip below and, if you know, please tell me.