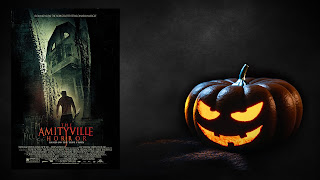 October can mean only one thing here at The DreamCage - it's time to count the days til Hallowe'en with David Ames' Hallow-vent Calendar of horror films! Day 24 is the 2005 remake of The Amityville Horror ...


Read the review of the original The Amityville Horror here.

As we talked about earlier, the use of the haunted house has permeated the silver screen for over a century. This idea is pervasive and unsettling because almost everyone can picture themselves in one way or another suffering the same fate as the characters on the screen. When these incidents are then tied to a true story, the fear factor is multiplied. Today, we look at a remake of a film based on the true story of the torture of one family at the hands of demonic forces. Today we look at Andrew Douglas’ 2005 remake of The Amityville Horror.

In 1974 Ronald DeFeo was found to have murdered his entire family. When questioned, he informed the police and anyone else who would listen that voices and evil spirits kept telling him to do so. A year later, a couple (George and Kathy Lutz) move into the house and set up their family, unknowingly, to be abused and infiltrated by demonic forces. Kathy’s children Billy, Michael, and Chelsea are happy at the house until they begin to experience paranormal phenomenon. Also, Chelsea has become friends with an invisible girl named Jodie, who everyone is convinced is an imaginary friend.

When George and Kathy go out to dinner, their babysitter Lisa informs the children what happened at the house, and then scolds Jodie for getting her fired. When she is dared to go into the closet, she becomes locked inside and slips into shock before she can be rescued, eventually explaining that she saw Jodie.

As things progress, George, the once loving and charismatic husband, has become bitter and reserved, hiding for hours in the basement. After doing some research, Kathy discovers that the house was once owned by a cult of Native American torturers led by a man named Ketcham. George stumbles upon the spirits in the basement, discovering a hidden room filled with darkness. After encountering the spirit of Ketcham, George becomes almost completely possessed and attempts to harm the family. Kathy incapacitates him and removes the family from the house where everyone recovers from the haunting. The family only stayed 28 days before fleeing and never returning to collect their belongings.

This film is shot beautifully and makes great use of natural light and darkness to play with the audience’s perception of events. The colors are vivid at times and draw attention to themselves in important ways. The camera movements are well executed and the film flows wonderfully from shot to shot and scene to scene. The suspense is palpable and the few jump scares that are present are incredibly effective.

Chloe Grace Moretz is wonderful as Chelsea, the youngest daughter. She is sweet and curious but provides just enough creep factor that the descriptions of Jodie become haunting. Jesse James (Billy) and Jimmy Bennett (Michael) are good, strong older brothers. They tease and argue but their roles are believable and crucial to the success of the family drama. Melissa George plays Kathy and is both strong and sympathetic. Utilizing skills she would later sharpen 30 Days of Night, she is far from the disheveled and overwhelmed woman. While she is caught off guard and confused, you never feel as though she can’t handle what is happening.

Lastly and most importantly, in a role that defies all character and personality traits, Ryan Reynolds, in a bit of genius casting, plays George Lutz. In the beginning, his charm, humor, and charisma are palpable and effective. What most people don’t realize is that Reynolds is also a rather good serious actor and his turn into the tortured and possessed George is downright unnerving. It is so well executed and the director and casting agent did a wonderful job of playing with audience expectations of an actor in the same way Hitchcock did with Anthony Perkins in Psycho. Reynolds is a revelation in this film and it was the first time I really wanted to see more of his drama work.

Once again, like a lot of the movies on this list, I think I have to throw my hat behind the remake for my favorite of the two. Between Moretz and Reynolds, this cast is just too perfect to be derailed. The original is a brilliant piece of film and I love it dearly but if I had to choose one to watch multiple times, I think it would have to be the 2005 version.