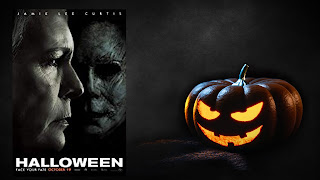 October can mean only one thing here at The DreamCage - and today David Ames' Hallow-vent Calendar of horror films has reached the big day! And what better way to celebrate than with his thoughts on the latest incarnation of the film Halloween...


Read the review of the original and remake of Halloween  here.

So we have reached the end of yet another Hallow-vent calendar. In trying to keep with the theme this year, I wanted to end on a very solid note as well as one that could be considered a remake although a more apt term would probably by re-imagining. We started this year off with John Carpenter’s 1978 classic Halloween and so, to close the loop, I think we need to end the month with David Gordon Green’s amazing 2018 film, Halloween.

It is 2018, forty years after Michael Myers killed five innocent people on Halloween night. Laurie Strode, a damaged and embattled older woman has lost most of her life to fear and agoraphobia, even losing her daughter at the age of 12 the state. She is paranoid and overly prepared and can’t move past the trauma that Halloween 1978 has caused her. Meanwhile, two podcasters from the UK have come to Haddonfield, Illinois in order to explore the Myers case and try to understand the monster. When they confront Michael in the mental ward and get no response, they try with Laurie who offers nothing as well, other than her knowledge that Michael is evil and should be killed. She reveals that she is also aware he is being transferred from the mental asylum to a high security prison to finish out his remaining days.

Laurie has a very tumultuous relationship with her daughter Karen, who blames her for the paranoia and an upbringing which consisted of firearms training, hand-to-hand combat, and survival skills. Laurie’s granddaughter, Allyson, wants to have a relationship with her grandmother but between Laurie’s mental struggles and Karen’s bitterness, that relationship is strained at best. When the bus carrying Michael crashes and he escapes, everyone knows where he is headed and what he plans to do. I don’t want to give anymore away as this film is only a few weeks old but suffice it to say, this film is a damn masterpiece.

From start to finish, this film ties back to the original, utilizing a lot of similar camera techniques and musical themes which emphasize the connection. The film also does a wonderful job of showing parallelism between Laurie and Michael. We see allusions to the original in scenes where Laurie is standing outside of Allyson’s high school, watching her, and when Laurie pulls a Michael and disappears after being thrown out of a second story window. The writers of this film know and love the source material and hearken back to it multiple times, creating little bread crumbs and Easter eggs for Halloween fans to pick up on.

Performances across the board were great. Judy Greer is a strong but slightly damaged Karen and Andy Matichak is the perfect Allyson. Will Patton shows up, playing the sheriff and also the first responder to the murders which took place in ’78, another brilliant tie to the original film. Lastly, James Jude Courtney and Nick Castle pull double duty portraying Michael Myers – they play him as big and brutish and emotionally vapid. In fact, this may be my second favorite Michael, behind Tyler Mane.

What the writers were able to build with character alone make this not only a great horror film but also an incredible movie in its own right. Laurie’s serious struggles with life don’t feel forced. Her extreme agoraphobia, doomsday style prep, and alcoholism all feel like natural consequences of the events in ’78. The writers worked hard to create something which felt realistic and achieved that on all levels.

The writers’ and director’s choice of kills was also spectacular. The kills were tasteful and brutal. The deaths they choose to show us are awesome and the bodies we simply find are just as horrific. Also, the choice to triple Michael’s kill count from the original movie was perfect and they pull no punches on age or gender. This Michael is as brutal as he has ever been. Just keep this in mind: Jack-O-Lantern head…my favorite of the kills.

I loved this film and having already watched it three times in the theater, I can assure you that it gets better with each viewing. If you are a fan of horror at all, especially slasher films, you need to see this before it leaves the big screen. You won’t regret it.

Thanks for coming out this year to check out the Hallow-vent Calendar. Hopefully you found some great films to watch and you enjoyed the daily column. Have a great 2018 and we will see you in October 2019!