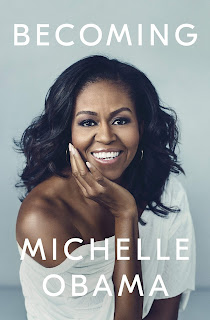 Michelle Obama will be coming to London in December to talk about Becoming...

Reflecting on her memoir, Michelle Obama will invite audiences into her world, chronicling the experiences that have shaped her—from her childhood on the South Side of Chicago to her years as an executive balancing the demands of motherhood and work to her time spent at the world’s most famous address. With unerring honesty and lively wit, she will recount her triumphs and her disappointments – both public and private – and in candidly recounting moments from her own extraordinary journey, Mrs Obama will also share life lessons learned, and inspire people to become the very best version of themselves.

As part of her work with and in support of young people, Michelle Obama, Southbank Centre and Penguin Live will be donating 300 free tickets to secondary school pupils from across London and the UK, as well as some local charities. They will take a seat in the Royal Festival Hall auditorium, which seats just over 2700 people and along with the rest of the audience will receive a hardback copy of Becoming.

The moderator for the evening, Chimamanda Ngozi Adichie, is the best-selling author of the novels Purple Hibiscus , which won the Commonwealth Writers’ Prize ; Half of a Yellow Sun , which won the Orange Prize; and Americanah , which won the National Book Critics Circle Award and was named one of The New York Times Top Ten Best Books of 2013. In 2012 she published We Should All Be Feminists and her most recent book, Dear Ijeawele, or a Feminist Manifesto in Fifteen Suggestions, was published in March 2017.

An allocation of tickets for ‘Becoming: An Evening with Michelle Obama’ will go on sale to Southbank Centre Members at 10.00am on Wednesday 7th November and a further allocation will go on sale to the general public at 10.00am on Thursday 8th November. Ticket prices range from £30 to £125. Each ticket will include a hardback copy of Becoming (RRP £25.00), supplied by Waterstones.

Becoming is published on 13th November