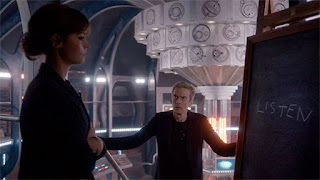 Our Doctor Who expert, Tony Cross, is journeying through all of time and space to bring us his thoughts on every available Doctor Episode. Today is the Twelfth Doctor adventure Listen...

Listen is one of those Doctor Who stories that I feel I need to watch again. There might be nothing going on here except the Doctor trying to sort out his own issues but then again there might be an entirely new race of creepy creatures to be added to the canon. There might not be a villain here at all, except possibly the Doctor himself in a strange way.

I think I liked it. But less so than the first time around, which is the first of the stories in this Capaldi re-watch that I have felt like that.

It intertwines the Doctor's desire to get to the bottom of a dream he's had with Clara and Danny Pink's date. It's a mixture of the extraordinary and ordinary. It's about fear and how we deal with fear.

There are some genuinely creepy moments. We get no actual answer either to what - if anything - the creature was. If it was even a thing. Was the thing in the bed a monster or was it one of Danny's friends playing a trick on him? Was there a monster outside the airlock or was nothing out there? I like that there are loose ends. We don't need answers to everything, although being Steven Moffat this episode might end up being key to the whole story arc. The less that happens in a Steven Moffat story, the more I'm wondering what I'm not supposed to see. I think I might have to call this paramoffatnoia, except that's a terrible word.

But does it matter that we don't see the thing? If there is a thing at all. Probably not.*

The young Danny scene is about getting an insight into Danny's character. People say that Clara's involved in every aspect of the creation of the Doctor, particularly after the final moments of this episode on Gallifrey, but she's also creating Danny Pink too. Here she takes Rupert and makes him Danny. It might not be intentional but that's what she does. But once more we have soldiers and soldiering in an episode to mull over.

Yes, I'm was a bit uncomfortable about Clara having to be intertwined with the Doctor's whole history because it removes his own agency, but it doesn't mean Clara's THE only reason the Doctor becomes the Doctor. Perhaps she gives him the boost he needed to be less afraid but there's a plenty of time for the Doctor to become the Doctor between the barn and the First Doctor's flight from Gallifrey with Susan.

Also, Clara's involvement with the Doctor seems to have had little in the way of consequences for her so far. Perhaps her interference into Danny Pink's life might have a different effect. After all, Doctor Who can't kill off Doctor Who, but it might be able to bump off Danny Pink. But perhaps I'm over-analysing. It's easily done. [This paragraph is from the article I wrong on the first watch before the season ended. I leave it to show that I'm not always wrong with my predictions.] However, who is Orson Pink and what does his existence mean? There are hints that he knows who she is. Perhaps we'll find out. Perhaps we won't.

My quibbles aside I think Jenna Coleman's doing a stonking job as Clara this season. Now she doesn't have to just be the 'Impossible Girl' she's developing into a character, although some of the banter between her and the Doctor about her appearance borders on the uncomfortable. Now that might be because there's a British piss-taking friendship thing going on - certainly, at one-point Clara's reaction is an amused smirk - but occasionally it seems played too seriously. Maybe I'm just being ultra-touchy about it.

I'm really enjoying the Capaldi Doctor though. He feels properly Doctor Who. Capaldi's Doctor Who isn't human. And it shows. It's a nice change from Tennant and Smith, although it has a certain resonance with Eccleston who often gets forgotten in these discussions. But we're only four episodes into the season so things have a long way to go yet.

The other thing to note is the sound design on this is incredible. In some ways, it would be a brilliant Big Finish story. Perhaps 'Listen' can be seen as a massive advert for audio Doctor Who. But the scenes inside Orson Pink's ship are atmospheric as hell as much due to the sound design as the performances.

So after all that I can say I enjoyed it but not as much as I did on the initial watch. I don't know why but I found the Danny and Clara date sequences far less entertaining than on the first watch, which isn't anything to do with either actor. It just seemed too long. I wanted more SF creepiness and less real-life awkwardness. Even though I think those scenes do an important job of contrasting the ordinary and extraordinary. I just thought there were too many of them.

It wasn't as much fun as Robot of Sherwood, but it has a certain creepy charm of its own. There are unanswered questions and seeds sown for the future of Series 8, but I bet there are kids up and down the country hiding in beds tonight in an attempt to scare their friends and family.

*I assume I wasn't the only person thinking about the Silence though throughout the first part of this episode.