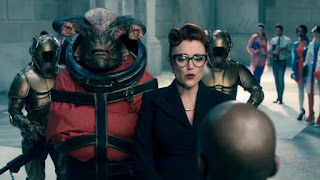 Our Doctor Who expert, Tony Cross, is journeying through all of time and space to bring us his thoughts on every available Doctor Episode. Today is the Twelfth Doctor adventure Time Heist...

You know what it reminded me of? The Gunfighters.

Stick with me with this. I'm not entirely mad.

Half the enjoyment in The Gunfighters - which a lot of people who like things serious seem to miss - is the fact it is as much a parody of western television stories and films as it is a Doctor Who story, and Time Heist is as much as a stylistic parody of television series like Hustle as it is a Doctor Who story. Douglas Mackinnon's direction - cuts, lens flares and slow motion etc - reflects that. And Mackinnon's direction is rather lovely. And it was in Listen too.

This is the first story of the season where The Doctor leads and Clara gets to play a more traditional Doctor Who assistant role. This is a Capaldi episode through-and-through and he's rather fantastic. He gets good lines, delivers them with style and is rapidly setting a high standard that rises above whatever material he's given.

I'm not sure it's the most original script in Doctor Who history. Perhaps that's the point but I think there's a danger of over-analysing these stories. Original ideas are hard to come by and the heist genre has its rules, which is fair enough.

But there's a certain pattern emerging in this season, which is starting to irritate me mildly. It's the lack of proper villains. I'm all for shades of grey. I'm all for villains who don't think that their plan is evil but for heaven's sake does every story have to be like this? It's like a reverse Season 8 problem: instead of the villain being the Master every week, now we've got no real villains. It's not a terminal problem but it's just getting a bit samey, particularly when the ending of this story feels so much like that of Hide.

There's a lot of talk about plot holes from people that criticise Steven Moffat's style of writing (even though this is credited to Stephen Thompson and Steven Moffat) and I've argued before that you'd struggle to find any Doctor Who stories free of plot holes. It's just a question of what we're prepared to accept. Normally I don't really care about them unless there's an absolute gaping hole so big you could drive a tank through it. But there's one moment in this story that I found myself going...er...hang on. [SPOILER FOLLOWS]

And that's when Psi and Saibara turn up to save the Doctor and Clara disguised as guards in Ms Delphox's office. When The Teller is there. This is a creature that we've been told can detect guilt but doesn't notice Psi and Saibara...but maybe there's so much distortion going on as the - very - guilty Doctor and Clara are standing in the room. Perhaps I've been unkind. Perhaps not. Maybe it matters. Maybe it doesn't. Maybe I'm just looking for reasons to pick holes in something that I quite enjoyed. Who knows. Who. Knows.

Psi and Saibara were interesting additions to the team and make a change from the Paternoster Gang. Neither character is spectacularly original: the half-man, half-computer and the shapeshifter but they're played well enough by Jonathan Bailey and Pippa Bennett-Warner. Whether we'll see them in Doctor Who again is moot but there's another Big Finish spin-off waiting to happen if they need one.

I mentioned it above, but this is the least Clara episode of the season so far. She's under-used - which some of the Clara haters might have enjoyed - but I kind of think it is a waste of a good actress.

Kudos should also go to Keeley Hawes, who is brilliant as Ms Delphox. I'm not sure how they decided on her look and who had input, but I think someone in the production team - going back a while - has a thing for women in glasses and suits. Or eye-patches and suits. Or women in suits full stop. But Hawes is fab. It's another example of an actor doing a small-ish part in Doctor Who that makes you wish they'd been given something meatier.

The Teller looks great too. Surprisingly realistic and alive, which brings a certain charm along with it. The exterior shots of the bank also look fab and then it is nice to see we find ourselves inside a lot of Doctor Who corridors. In that sense - again - it feels very Classic Doctor Who. As does the fact that when in the final shots we see the Teller walking away it does look awkwardly 'person in a costume'. I almost expected them to walk off into the sunset Morecambe and Wise stylee singing 'Bring Me Sunshine' as they go. But perhaps I am just a foolish old man.

Re-reading what I've written I've been nit-pickier than the story deserves. It's good fun, which is always the most important thing in a Doctor Who story. It wasn't as much of a romp as Robot of Sherwood but fun enough. It wasn't hugely original but that's not necessarily the worst of crimes (despite what some people seem to think.)

As I've said before the fundamental rule of Doctor Who for me is that it should be fun. Sometimes it's so fun that it over-rides all my standard adult analysis but sometimes it's just about fun enough. And that's how I feel about this story.