Doctor Who - The Caretaker 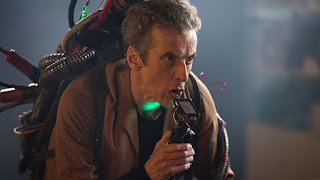 Our Doctor Who expert, Tony Cross, is journeying through all of time and space to bring us his thoughts on every available Doctor Episode. Today is the Twelfth Doctor adventure The Caretaker...

I have to say The Caretaker was - with a couple of exceptions - not a story I particularly enjoyed. If not, quite, a placeholder it certainly wasn't more than a blink and you'll miss it adventure with killer robots. But then I suspect the point of this story wasn't the adventure it was the Clara and Danny relationship episode.

The problem for me was there was far too much snark and not enough fun. The balance between adventure and non-adventure was unbalanced. There were too many scenes featuring people arguing and not enough scenes of the Doctor and Clara saving the world. Obviously, part of this is the Twelfth Doctor's convenient dislike of soldiers just now that Clara starts going out with a soldier. That's an excuse for some not very witty banter about a soldier only being capable of teaching PE.

At the time this went out I think some people felt that the Doctor's attitude to Danny had the whiff of racism about it, but I don't think that's the case, but you do find yourself thinking that the Doctor is being unnecessarily unpleasant to a man he barely knows. Yes, I'm aware that the lack of tact is going to be a key trait in the Twelfth Doctor but in The Caretaker, it feels a little too much.

As does Danny's tirade against The Doctor as 'an officer'. That scene in the TARDIS is genuinely uncomfortable but if the Doctor hadn't ostentatiously referred to himself as a Time Lord would Danny have been able to guess that he was an aristocrat. And when did Time Lord's become aristocrats in the first place? I always saw them more as a kind of priestly cast in a scientific theocracy...which I suppose would make them aristocrats of sorts. Whatever. Danny's tirade just doesn't seem to fit the Doctor's behaviour. However, it seems to be a theme of sorts because Robin said similar things in Robot of Sherwood but with less hostility (perhaps because he too was an aristocratic hero slumming it in the name of his principles.)

Perhaps this is a purely personal dislike because I don't want to think of the Doctor as an aristocrat because I don't like aristocrats in general. It's the same discomfort I feel when reminded that the Doctor can be viewed as a sort of great, white hero coming to the rescue of whichever poor alien species can't save themselves. It's purely personal, which I think contributes to my dislike of this story.

I can't blame the actors. I think Capaldi, Coleman and Samuel Anderson are excellent. They deal with the comedy and drama equally well. Even Ellis George as Courtney Woods didn't annoy me, and I have a low tolerance for child actors (and I've still not got over the two awful children from Nightmare in Silver.)

I don't blame the director, Paul Murphy. I think he does a good job with what he's given. I blame the script, which doesn't quite do it for me. It's not terrible. This isn't one of those Doctor Who episodes that I'm going to mock mercilessly for bad lines or huge plot holes. I think this is purely personal inability to get on with what the writers - Steven Moffat and Gareth Roberts - are trying to do in this story. So, I don't blame the writers. I blame myself.

Sometimes a Doctor Who story is just not your bag and that's not the fault of anything or anyone involved in making it, although sometimes when writing reviews, we tend to make a purely personal dislike seem like it is structural. In the case of The Caretaker it just doesn't do it for me. And that's fine. The danger, of course, comes when we take our opinion of one story and make it a massive tirade about how Doctor Who, in general, is rubbish or that the showrunner is the personification of an evil attempt to destroy your childhood.

So, I didn't enjoy The Caretaker much but there's another Doctor Who story coming soon. And then another. And there's always all those stories from 1963 onwards that I can go and dip into if I'm feeling particularly in need of a shot of Doctor Who I like.