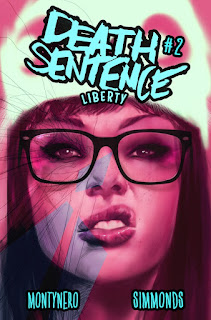 Hand over the housekeeping money, smash open your piggy banks and retrieve all the loose change from down the back of the sofa, THEY'RE BACK! And this time they've brought their friend, as the stunning cover (above) for issue two of Death Sentence Liberty has been provided by the comics artist guru that is Ben Oliver.

In case you have no idea what the Death Sentence phenomenon is all about (where have you BEEN?!) Death Sentence Liberty tells of three characters afflicted by an STD that kills them in six months but gives them superpowers.

Verity is the beating heart of the story. Frustrated and unfulfilled she longs for something more than cheap thrills and empty sex – to be a great artist and achieve something timeless. With no fucks left to give she's a dangerous maverick rallying against an increasingly aggressive government.

Weasel is a rockstar drug-addict desperate to reconcile with his family and record a legendary album before he dies. His G-plus powers are as unreliable as he is, spreading chaos or comedy - which is why Verity dumped him.

Roots is half-woman, half-plant, and 100% badass - an ex drug dealer using her burgeoning G-plus powers to protect her hood from police and gang violence.

Additionally, Jeb is an FBI agent infiltrating the UK's top-secret G-plus research facility to steal their secrets - a family man in far worse trouble than he realises.

As ever, the comic is "for open-minded adults only - featuring sex, drugs, rock n roll, humour, violence, monsters (human and otherwise), vodka, biting satire and other fun stuff" - so just how we like it then.

With the first issue of Death Sentence Liberty now winging its way out to backers of the last kickstarter, this is your chance to jump on the series and see what you've been missing because you can catch up with issue 1 as a perk of the issue 2 crowdfunder! Clever or what? Other perks include bookplates, prints, original art commissions and, this time, there's even a calendar so that you can "Tick off the days to your wholly imaginary demise from G-plus, and live 2019 like there's truly no tomorrow!" If WHEN you want to throw more money at the campaign, there's a chance to get a bespoke fully painted style Monty Nero cover for your own comic, or to hang on your wall as framable art and, as ever, there's the full "Montynero Experience" where you not only get two days with the man himself, hanging out in all the cool places and finding out all about behind the scenes secret stuff, you will be immortalised forever on the cover of Issue 3. How amazing would that be?! But you'd better be quick, The kickstarter for Issue 1 hit its target within the first DAY, and this one is going to be no different, especially with an Early Bird Verity Art Print on offer for all backers in the first 24 hours.

Find out more and back the Kickstarter HERE