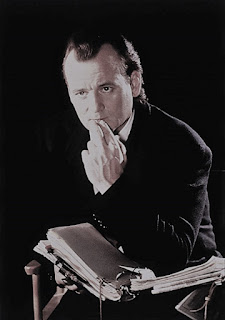 Our resident ghost of Christmas Past, Susan Omand, rattles her chains and heads back through the mists of time for her own What If version of the film Scrooged...

Yes, so Scrooged is 30 this year. While we’re all feeling suitably ancient about that, I was watching Bossman Steve chatting to Stuart Mulrain on social media and discussing how they might recast the characters in such a famous Christmas film, to remake it for the 21st century (read about Steve's recasting here), and it gave me an idea. What if...

What if the 1988 film of Scrooged was already a remake? What if, instead of trying to remake the film 30 years AFTER 1988, the original-original film version was made 30 years BEFORE the one in 1988, looking at the life of a studio executive when the golden age of TV was just starting to take over from the golden age of the silver screen.

Before we get to the lead roles and the rest of the cast, since Steve has recast the wonderful Lee Majors in his take on the film, I have to do the same. An action hero actor who is easily recognisable by all in 1958? In a cameo that would lead to his most famous role a couple of years later, he is Spartacus. He is Kirk Douglas.

And now to the lead role, that of Frank Cross, which for me was a no-brainer and helped to cement the idea in my head that a 1958 original film was possible. It also explains his own cameo role in the 1988 “remake” – Robert Mitchum. You just need to look at his role in Heaven Knows, Mr Allison to see that he had a much broader range than just westerns and noir detectives and I think he could give the callous Mr Cross a real depth.

Talking of Heaven Knows, his leading lady in that, and many other films, will also be his leading lady in Scrooged 1958. There’s a reason why Deborah Kerr was often cast with Mitchum and that mix of sweetness and feist, along with the on-screen chemistry between them, makes her the obvious choice for Clare Phillips. 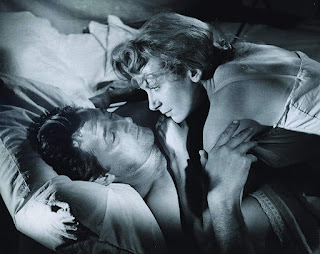 Now that we have our main two sorted out, let’s visit the office. First up is Cross’ long-suffering secretary Grace. I wanted to keep a black woman in the role as there were very few who got the screen time they deserved back in 1958. One who broke the mould though, and fresh off her starring role in Carmen Jones is Dorothy Dandridge.

The CEO of the company Preston Rheinland comes next, the role that Mitchum himself would take in the 1988 remake, and I wanted an actor with stature that would be a believable authority figure. Since he played Mitchum’s CO in Thirty Seconds over Tokyo in 1944, I went for Spencer Tracy.

Brice Cummings is next on the list. He’s a bright young upstart, all keen enthusiasm and brash over-confidence and, when you think of the roles he goes on to play in The Hustler and as Butch Cassidy, it’s a great supporting role for Paul Newman.

Finally from the board room, it’s the PR executive whom Cross fires, Eliot Loudermilk. We want a mouse that is capable of turning roaring psycho at a moment’s notice so I went for Mickey Rooney. Don’t believe that he can do the darker side needed for revenge? Just look at his performance as the gangster Baby Face Nelson in the film of the same name.

There’s one more name from the office that I want to look at and that’s Cross’ deceased partner Lew Hayward – the comical, hard drinking, womanising executive who died seven years previously from a heart attack on the golf course, who introduces the ghostly visitations. And only one name came to mind, after seeing him and Mitchum play off each other in the screwball comedy The Grass is Greener, Cary Grant.

This brings us neatly to the ghosts. Christmas Past in the film is a bit of a hardman. Chain-smoking, bad-mouthing and just generally a mean and nasty piece of work from New Jersey. It had to be the stereotypical gangster James Cagney.

The ghost of Christmas Present has to be able to play light and bright but with a sardonic edge and I went for Lucille Ball who had just finished her run of I Love Lucy TV shows and was looking to get back into film.

Finally, a tiny role with few words but much screen presence, and a pivotal character to the film, the eminently scary Ghost of Christmas Future. Because we never actually see his face I wanted a huge, huge name for this. Who else but Mr Horror Film himself Christopher Lee.

So there we have it. A film that probably is still somewhere in the vaults of Paramount Pictures gathering dust. And there it should stay because this is one case where the 1988 remake is so much better.