Audio - Doctor Who: The Twilight Kingdom 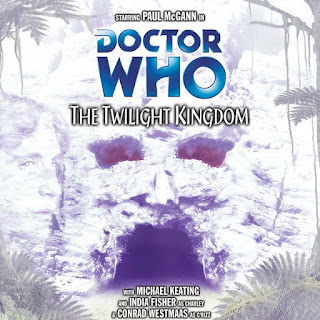 Our Doctor Who audio expert, Tony Cross, delves into the back catalogue available from the Big Finish website. Today is the Eighth Doctor and Charly adventure The Twilight Kingdom...


Here's a thing. In the past ten days I have listened to 35 episodes of the Eighth Doctor's adventures via Big Finish. It has (mostly) been quite a pleasant and easy task. However today was different. I am tired and it has been a bad week at work (and elsewhere). I was not - am not - in the most receptive of minds, which reflects somewhat in the difficulties I had getting into this story and I'm not sure whether I can be said to have given it the fairest of hearings.

In the end it felt like a bit of a drag listening to it.

The question is whether that is more to do with the baggage I'm pulling along or the story itself. It is a moot point. (A phrase I have used far too often over the last couple of days. I must find another).

The Twilight Kingdom certainly is not as good a story as The Natural History of Fear, although the basic plot is fine. Perhaps I'm just tired of each Big Finish story ending with more questions. Can't we just have a bit of fun? Something without baggage?

At its most basic this is some corners of the universe have bred the most terrible things they must be fought type story. There's something up to no good and the Doctor must stop it. Will stop it. There will be a price to be paid but this time it won't be the Doctor, Charley or K'rizz that must pay it. Someone else will.

This story is perhaps also about coping: with grief, with loneliness or with anger and a little about growing up.

Actually, whenever I write something like that, I have a picture of the writer - in this case Will Shindler - reading this and asking what the hell I'm talking about. It's the same feeling I get when I think a story has been influenced by some other book or film or Doctor Who story. I expect the writer to come up to me and say, "You know I've never read/seen/whatever that." Perhaps I'm searching too hard for depth and meaning in something that is essentially entertainment.

Anyway, it isn't a bad little story really. It certainly elevated by an excellent performance from Michael Keating as Major Koth. Michael Keating is best known for playing Villa from Blake's 7. He was something of a hero of mine was Villa so I might have been inclined to be nice to Michael Keating anyway but in truth I don't need to be. He's unrecognisable voice wise. If I hadn't checked the credits, I don't think I'd have recognised him at all. Major Koth is an interesting character and Keating gives him a convincing and moving life.

This is another story where it would be hard pressed to put your finger on a genuine villain. There's nastiness - and rather gory nastiness via the medium of sound effects and my own (obviously rather sick) imagination. People and things are misguided or broken but not stereotypically villainous, which even the Doctor can see.

That's pretty much all I have to say about The Twilight Kingdom. McGann, Fisher and Westmaas are up to their high standards, although K'rizz still lacks a little depth I think even if bits and pieces of his character are leaking out over time. The main cast's excellence is becoming standard really, almost unworthy of comment.

So forgive me if this is a rather odd review. This isn't a bad story but perhaps it was the wrong story at the wrong time for me.