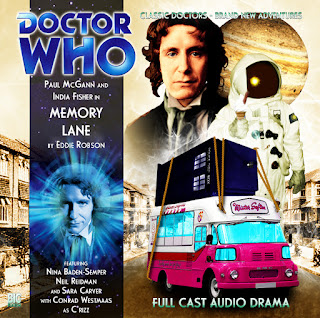 Our Doctor Who audio expert, Tony Cross, delves into the back catalogue available from the Big Finish website. Today is the Eighth Doctor and Charley adventure Memory Lane...

This is rather fun. It is neither too heavy nor too heart-breaking, which is nice.

The Doctor, Charley and C'rizz materialise in the front room of the snooker watching, tea making Mrs Braudy (Nina Baden-Semper) and her grandson, Tom (Neil Reidman). Neither of them seems too perturbed by the TARDIS arriving.

Tom is building a spacecraft out of Lego. He's also fascinated by this odd programme that keeps breaking into the snooker that seems to show the struggles of the crew of a spaceship. O and he's behaving like he's ten (and a half) but are an adult.

These little mysteries are as nothing as those presented to the TARDIS crew when they finally go outside - to buy an ice-cream. The whole street seems to be identical houses, stretching as far as the eye can see. All occupied by Mrs Braudy and her teapot. It isn't surprising then that they lose track of the TARDIS. That is until the Doctor sees it disappearing into the distance in one of the series oddest , least dramatic but still rather lovely cliff-hangers.

This is a rare story that almost does without a villain. There's a prison and a prisoner but everything that happens seems to be more the result of a misunderstanding as opposed to any genuine nastiness. No one is plotting the subjugation of the entire universe or wrecking their revenge on the Doctor.

There's a couple of characters: Lest (Charlie Ross) and Argot (Neville Watchurst) who are effectively a 'villainous' combination of Rupert Murdoch and Brian Johnstone (the cricketing commentator for those of you younger than me and/or less aware of cricket commentators ). Their only real vice is greed. Even when they try to get something back from the Doctor, they're attempts at torture are distinctly second rate and charmingly amateurish in comparison with Mr. Twyst and Rawden's professionalism in 'Something Inside'.

It is all rather jolly and palate cleansing after 'Something Inside'. Only the regular hints - which have been more obvious recently - that C'rizz might not be the Eutermesan he appears to be brought any gloom to the story. C'rizz's true nature has been the rather subtle arc of Big Finish's 8th Doctor stories since they escaped the Divergent Universe.

India Fisher gets to do 'kid Charley' again who seems a rather sweet little thing. All excitable and enthusiastic. The kid Charley is as much an Edwardian adventuress as the adult one will be. Kid Charley also means we get to see Anneke Wills reprise her role as Lady Louisa Pollard, which I always rather like.

Yes, this is another story about memory and yes, it's another prison as C'rizz rather sourly points out. But it is a nice straightforward, old school romp, which is a rarity in Big Finish's 8th Doctor range, which gets quite draining at some points.

I admit that might be more because of the slightly artificial circumstances my 'Ruthless Doctor Who Schedule (TM)' has imposed upon events. Trying to listen to all the 8th Doctor audios in time to hit my 8th Doctor Starburst column deadline has forced the gap between stories to a minimum, which can distil themes and tones. The artificiality comes with the territory and my Douglas Adams attitude to deadlines.

Anyway, this is worth a listen at any time as it is rather nice. I know nice is a terribly weak word. The verbal equivalent of 5.5 on a 'how much do you like' scale. It's such a lightweight word that it feels like a toleration rather than real enjoyment: nice bloke, nice people, nice food, nice cup of coffee. A lukewarm piece of faint praise.

However, it'll do. This is fun. Give it a listen.