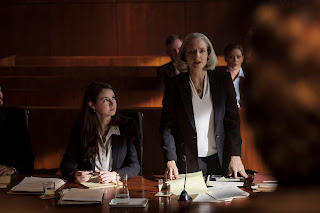 True stories are the most difficult films to review, particularly those such as The Mauritanian, dealing with real people caught in the net of forces more powerful than themselves, objects of the wrath of a nation seeking retribution, with a government keen to find scapegoats and not too concerned with how they find them.
Recent political events in the western world have torn the curtain from our institutions to reveal how quickly they can sink into corruption and how eagerly they throw the blame for their own misdeeds onto a convenient target, without offering any proof. The Mauritanian is a timely reminder of how ‘civilized’, democratic nations can sink into barbarity when their own security is threatened.
The film is a legal drama directed by Kevin Macdonald from a screenplay written by M.B. Traven, Rory Haines and Sohrab Noshirvani. It is based on the 2015 memoir ‘Guantánamo Diary’ by Mohamedou Ould Salahi, a man who was detained and imprisoned on Guantánamo by the U.S. government for fourteen years without charges.
The action begins with the U.S. reeling from the attacks of 9/11 and determined to catch the perpetrators of the outrage. The Mauritanian of the title, Mohamedou Ould Salahi (Tahar Rahim), is whisked away during a family event in his home for questioning by the police, and then simply disappears, leaving behind loved ones desperate to find out what happened to him.
The Bush and Cheney administration is under pressure to find those connected to al Qaeda. They come across evidence which they decide is enough to accuse Salahi of being a recruiter for Bin Laden. There are two events which they feel link Salahi to al Qaeda - one of the hijackers spent a night on Salahi’s couch in Germany, and he once received a call from his cousin on Bin Laden’s phone. However, Salahi has his own explanations for these occurrences.
After several years, an attorney by the name of Nancy Hollander (a steely Jodie Foster) takes up his cause, starting with a simple habeas corpus case, wherein the U.S government must charge Salahi or let him go. She recruits an associate named Teri (Shailene Woodley) to assist her.
The military prosecutor is Lt. Colonel Stuart Couch (Benedict Cumberbatch), who was close friends with one of the pilots murdered by the terrorists on that day, and he is keen to bring the architects of the crimes to justice, seeking no less than the death penalty. Couch is determined to see justice done and cannot comprehend why Hollander would want to see Salahi set free due to lack of due lawful process for his imprisonment.

Much of The Mauritanian specifies the stages of Salahi’s interrogation while imprisoned in Guantánamo. Although fluent in French and German, as well as in his native language, he is so long imprisoned amongst the American military that he has time to learn English before visited by Hollander and Teri.
His grasp of English means he can interact with his captors and is eventually on first name terms with the American soldiers and CIA interrogators.
When years of regular interrogations fail to make Salahi change his explanation and confess to the crimes they are accusing him of, the military take over from the CIA. They have been given permission to use whatever means they see fit to get a confession.
So begins Salahi’s descent into hell - shackled in a stress position in a freezing cell with death metal music blaring out at high volume for hours and days on end. Sleep deprived, waterboarded, beaten and humiliated by masked guards and sexually assaulted and insulted by a masked female soldier. It makes for painful viewing.
It transpires that both Hollander for the defense and Couch for the prosecution find it impossible to get to the bottom of Salahi’s case for imprisonment. The countless files concerning his years of interrogations have been misdated, ‘summarized’, redacted, or are simply ‘classified’ and impossible to get hold of by either side. Both Hollander and Couch begin to suspect that the U.S. military may in fact be holding men in the Cuban prison without proof and denying them the right of a legal trial.
The situation becomes increasingly obfuscated by red tape and confusing as Hollander and Teri find what appears to be a ‘confession’. However, by this stage even Lt. Colonel Stuart Couch begins to doubt the government’s narrative. Thus, it’s up to Hollander and her legal team to mount a challenge. 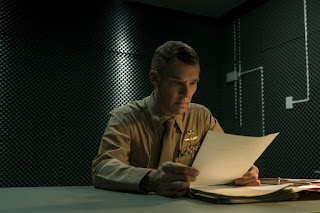 Both Jodie Foster and Benedict Cumberbatch as Hollander and Couch give sterling performances, Cumberbatch adding depth to a honourable character who is appalled to discover the extent of his country’s crimes.
But the emotional core of the film is French-Algerian actor Tahar Rahim, (excellent in his leading role in 2009’s A Prophet). Rahim’s nuanced and compelling performance succeeds in engaging our sympathies with his character while we still remain unsure of his blamelessness.
The U.S was traumatized by the attack on their own soil, one that was unforeseen and incomprehensible to most of the public. The government at the time felt compelled to prevent any further attacks coming from an enemy they knew so little about. To fulfil this aim, they abandoned their own principles.
As we now know, Guantánamo Bay operated outside the law. People could be held without charge for years, tortured into confessing under duress to something that they may not have done. The federal courts have often since ruled that people were held there unlawfully, Salahi’s case being one of the most high-profile and disturbing.
The rest of the world should not feel complacent, as most nations are not blameless regarding their own instances of horrific moral compromises. It remains reassuring that the US is still a country which offers the freedom to publish a book and make a film openly revealing one of the darkest periods in its recent history, and that at least, is to be commended.
Review Copyright R.H. Zelen – ©RenZelen 2021 All rights reserved.
Follow Ren on Twitter @RenZelen
Images - Glasgow Film Festival
Email ThisBlogThis!Share to TwitterShare to Facebook