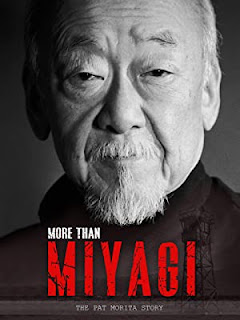 Being the uncultured child that I was, I didn’t watch many films growing up, so it was only around a year or two ago that I watched the Karate Kid movie. The movie immediately resonated with me though, as I felt like the child that is Daniel LaRusso, looking up to Mr Miyagi as he helps Daniel to overcome the bullies at school. Miyagi was the mentor I needed in school and that’s where my fondness for this franchise began. Miyagi was also a mentor and a friend to Daniel LaRusso, so that’s how I saw him, as, someone who brought joy to the life of a young lad struggling through school, but who was Pat Morita, the actor who played him?

My first thought looking back at my experience with this documentary is that Pat Morita was a very troubled man, with a lot of demons and, similar to comedians/actors such as Robin Williams, he used comedy as a means of coping with it. This story doesn’t start with any personal struggles however, instead this documentary begins with how most people knew him to begin with, which is as a comedian, so the story reflects how the comedy covers up the tragedy as we later learn there was a lot of in Morita’s life.

On watching Karate Kid, I never would have realised that what Morita calls his “award nomination scene” (in which Miyagi drunkenly reveals to Daniel LaRusso that his wife and child died in an internment camp) that Morita and Miyagi would become almost the same person. Whilst Morita’s children are alive and well he did grow up in an internment camp and continued to feel disconnected from his immediate family from the moment he was diagnosed with spinal tuberculosis at age 2, as in this documentary Morita recalls that it was his aunt that raised him. Because of this he would often struggle to communicate with his parents, as they insisted on speaking to him in Japanese, despite the fact that this was a language that was becoming alien to him.

Despite his passing, Morita still has a prominent role in this documentary as, very cleverly, the director Kevin Derek chooses to use a variety of footage for earlier interviews done by Morita before he died, as well as various footage filmed by Morita’s wife Evelyn Guerrero, which would be overlaid often with interview dialogue with Guerrero speaking about her husband. The use of all of those that had a personal connection with Morita as well as all those who worked with him or were influenced by him in some way, provides enough of a perspective for any viewer to come out of this with a clear idea of who Pat Morita was. 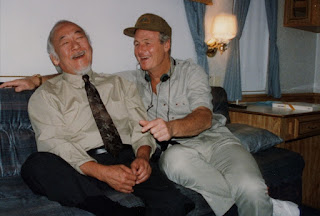 I think, by doing this, the documentary gives the audience time to get to know Morita as not only an actor but as a father, friend, comedian and husband. We learn that he did his best at all of these things, though when his career struggles began, this would ultimately have an effect on his relationship with his wife and the acting roles he did get.

Hearing Guerrero talking about her and Morita’s various struggles was certainly interesting, as the documentary begins their story from how they knew each other to how they got married, to how she helped him through his career and the various difficulties Morita had to deal with on top of the tragedies of his past. His way of coping involved drinking and hearing all of these stories about how through his addiction he continued to try and find work following the Karate Kid was certainly an eye opener. It almost felt like he needed Karate Kid as much as Karate Kid will always need Mr Miyagi.

Just like a biography, the film covers all the bases on how Morita made a difference culturally, in being the first Asian to feature in a sitcom, to how he would play the role of a mentor in Karate Kid as opposed to the enemy, as people from other countries seemed to be in American movies at the time. In terms of pop culture he changed things significantly too by giving not only kids of the Karate Kid generation a person to look up to when it comes to fighting only to defend yourself but also to the kids of today; Without Mr Miyagi there likely would not be shows such as Cobra Kai that continue to teach kids the lessons of life to this day. That is something Morita reflects on at the end of the documentary, that this is how he’d like to be remembered, as a good mentor and father.
Follow Kraig on Twitter @Kraigandhismac
Images - Love Project Films