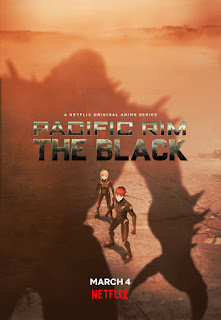 Coming to Netflix next week, watch the latest trailer for Pacific Rim: The Black...
There was a time when Kaiju rose from the Pacific Rim only to encounter gigantic robots, Jaegers, built to fight them back. That time has passed. Now, Australia has been overrun by Kaiju, forcing the evacuation of an entire continent. Left behind, teenage siblings Taylor and Hayley embark on a desperate search for their missing parents, teaching themselves to pilot a battered, long-abandoned Jaeger to help in their quest and give them even the slightest hope of surviving.
Legendary and Netflix's Pacific Rim: The Black is the continuation of the film franchise co-created by Guillermo del Toro and sees a welcome transition to anime. The series was created by Craig Kyle (Thor: Ragnarok) and Greg Johnson (X-Men: Evolution) with a voice cast that includes and all seven half-hour episodes of Season 1 debut on Netflix, with an English voice cast, starting on March 4th.
Watch Pacific Rim: The Black on Netflix
Image - Netflix
Email ThisBlogThis!Share to TwitterShare to Facebook