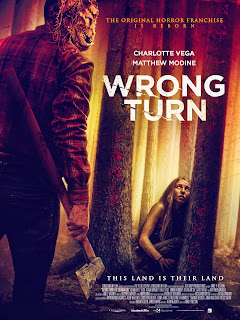 On UK Digital platforms from today, thanks to Signature Entertainment, Ren Zelen watched the latest addition to the Wrong Turn franchise...

I confess I am a newbie to the long running Wrong Turn franchise, one that I was astonished to find, began nearly twenty years ago. From the series debut in 2003 through to Wrong Turn 6: Last Resort in 2014, the sequence of films apparently vary in quality and popularity.
This latest ‘Wrong Turn’ departs from the previous formula in the sense that it is not a sequel and introduces entirely different characters within a similar scenario. However, it does have the benefit of the Alan B. McElroy, the writer of the first movie, coming in to pen this version. So, as I haven’t seen any of the others, I can assess 2021’s Wrong Turn on its own merits.
Newcomers like me, who haven’t trawled through the six preceding movies, and open-minded fans of the original films, should find themselves pleasantly surprised as in Wrong Turn ’21 director Mike P. Nelson and writer McElroy manage to subvert expectations and tropes, punctuating the film with shocks which build the sense of dread to an arresting climax.
The film begins with a fairly conventional horror premise – a group of well-to-do city kids drive to a hick town in Virginia with the intention of hiking along a trail in the forested Appalachian Mountains. The group of youngsters includes Jen (Charlotte Vega) and her boyfriend Darius (Adain Bradley), an idealist who works for a non-profit organization designing dwellings for communities.
They are accompanied by gay couple Luis (Adrian Favela) and Gary (Vardaan Arora), medical student Milla (Emma Dumont) and her hothead fiancé Adam (Dylan McTee).
The young townies, including loud-mouth Adam and the gay and mixed-race couple, don’t exactly endear themselves to the good ol’ boys in backwoods Virginia. Their ‘millennial’ attitudes don’t sit well with the locals in the town’s watering hole who mock them about their recklessness in wandering into wild territory where people get lost and don’t come back.
Indifferent to the warnings to keep to the designated path, the group set off along the Appalachian trail to ‘commune with nature’. Inevitably, they opt to go off the beaten track in order to find an old civil war fort. Instead, they find themselves lost, and begin to see shapes flitting behind the trees. Things get nasty in the deep woods as they discover that there, the forest floor is littered with lethal booby traps.
After not hearing from his daughter Jen for six weeks, worried dad Scott (Matthew Modine) heads off to the small town in Virginia from which she last called him to find out what happened to her. Having little co-operation from the uninterested local police, Scott questions the wary locals and despite their warnings, is left with no choice but to go and search the wild forests himself in the hope of discovering what has happened to his child.
What he doesn’t know is that Jen and her friends were abducted by a survivalist cult known as The Foundation, whose leader is called Venable (a creepy Bill Sage). They wear animal skull masks and moss-covered robes as camouflage and have lived in isolation in the forests of the Appalachian Mountains since 1859, forming a secretive civilization of hunter-gatherers. 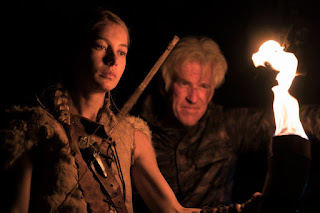 This Wrong Turn movie proves to be a tense survival horror that develops into a brutal backwoods nightmare. Writer Alan B. McElroy has taken a more mature view of the culture clash between the over-confident townie kids and the folk of the woods. The idea of who is right and who is wrong is more complicated and less clear cut. McElroy creates a scenario that initially gives each of the opponents a credible claim to the moral high ground.
The Foundation represent a society set up in opposition to what they see as a world in ever greater retreat from nature. They raise difficult questions regarding the preconceptions present in the outside world as represented by the group of young intruders, and seek to convert trespassers to a more primitive interaction with their natural environment.
The scares are well executed, the violence is appropriately measured to fit the tale, and the performances are consistently strong; with Matthew Modine grounding the film as the ‘everyman’ father and imbuing the story with depth and a reminder that everyone abducted by the cult was once someone’s son or daughter. Vega too gives a spirited performance, throwing herself into the physicality of her role.
This film is a good horror yarn and deserves attention on its own merits. It’s almost a pity that it is associated with the Wrong Turn franchise. From what I’ve heard it seems to be a considerable improvement on some of the movies that have gone before.
2021’s Wrong Turn marks a clear break with the original storyline and gives the lie to the idea that sequels and reboots are disappointing and merely a way of cashing in on previous successes, and whatever you do, don’t miss the end of credits scene!
Wrong Turn is released by Signature Entertainment on UK digital platforms on the 26th of February and on Blu-ray and DVD on the 3rd of May.
Review Copyright R.H. Zelen – ©RenZelen 2021 All rights reserved.
Follow Ren on Twitter @RenZelen
Images - Signature Entertainment
Email ThisBlogThis!Share to TwitterShare to Facebook