Audio - Doctor Who: Minuet in Hell 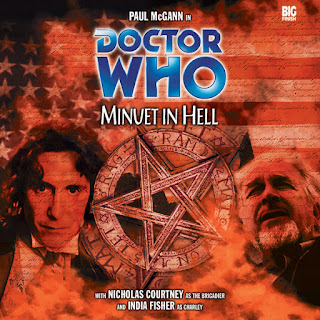 Our Doctor Who audio expert, Tony Cross, delves into the back catalogue available from the Big Finish website. Today is the Eighth Doctor and Charly adventure Minuet in Hell...


So 'Minuet in Hell', starring Paul McGann as the Doctor and India Fisher as Charley Pollard. Set in the fictional, soon-to-be US state of Malebolgia it features The Doctor's lost memory; devious politicians with diabolical machines; dirty old men; the reincarnation of the Hellfire Club; demons that turn out not to be demons (or Daemons) but Psionovores and Brigadier Alistair Gordon Lethbridge-Stewart (Retired...sort of).

The first thing that needs to be said is that it is far, far too long and takes a reasonably straightforward plot and stretches it until (almost) breaking point. It's as if the producers fell in love with the idea of the Doctor in an asylum but couldn't or wouldn't use it as a story on its own so tacked it on to a bog-standard Doctor Who adventure.

And the stuff in the asylum is fun. It's atmospheric, if you like your atmosphere a wee bit creepy. The idea that the Doctor can't remember who he is and that his identity might be taken by someone else - in this case Nicholas Brigg's Gideon Crane - is nicely played. We, of course, know who the true Doctor is as we know it is Paul McGann. But inside the fiction the Doctor's uncertainty is disturbing. Especially as Gideon Crane - convinced that he is the Doctor - undertakes a taunting run through the Doctor's long-term memory. Who is the most deluded? Why does Gideon Crane think he is the Doctor in the first place?

That story runs parallel to the 'bad guy trying to take over the world' storyline. In this case our main bad guy is Dashwood (Robert Jezek) , a preacher-politician trying to win the Governorship of Malebolgia. He's aided by Dr Dale Pargeter (Maureen Oakley), another in Doctor Who's long line of scientists who believe the ends justify the means. In this case experiments with a machine that transfer minds from person to machine allowing Dashwood to replace human minds with those of his demon allies. Dashwood thinks they're Lucifer's minions but...well appearances can be deceptive.

Dashwood is opposed by Senator Waldo Pickering (Morgan Deare) for political reasons. I'm afraid that there's so many Southern US accents being thrown around at this point that there's a danger of this sounding like an am-dram version of Gone with the Wind. Waldo is probably the most annoying character in this story and every time he appears (well almost) the pace of the story seems to slow down to sludge. Waldo has a grand-daughter - Becky Lee (Helen Goldwyn) - who is a kind of Big Finish version of Buffy. Sort of. Becky Lee and Charley have a lot of scenes together, which err on the side of the comedic.

That brings me on to why this story doesn't quite work. It is effectively two stories with two different tones welded together and as a result, it is too long and too slow. There's one excellent horror story here & one rather bog-standard Doctor Who run around. Join them together and neither of them works well.

Oh I should say that none of this has any impact on how brilliant Nicholas Courtney is as the Brigadier. He's older, wiser but still one of the best characters to emerge from Doctor Who. In the hands of a lesser actor the Brigadier could so easily have been a cardboard stereotype but there's a fine dusting of sardonic wit and sharp intelligence that makes the Brigadier so much more. This is as much a Brigadier story as it is the Doctor's.

So this has its positives but, in the end, it doesn't quite work for me and it felt at points like a real struggle to get through the thing. I suppose trying to do too much isn't such a bad crime. Better that than doing too little.

There's too much happening for this to be anything more than a qualified success. The performances are all reasonably OK. McGann's great, especially during the scenes when he's not sure who he is or what's happening.