Comic - The Demonhuntress 1888, The Year of the Ripper 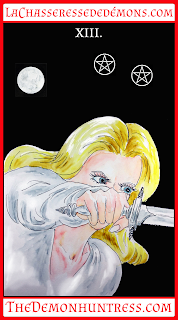 Susan Omand hitched up her skirts, sharpened her sword and read The Demonhuntress 1888, a short graphic story by Paulus Linnaeus...

It’s not often that a prequel “short” can stand on its own without knowledge of the main story, but that’s what you get with The Demonhuntress 1888, The Year of the Ripper. Created by Paulus Linnaeus, the main universe of The Demonhuntress, a young woman named Alexis Strauss, seems to centre on Quebec, Canada, specifically the McGill University in the 1930s but this prequel comic concentrates on an origin story, if you like, and one of Alexis’ ancestors, Faustina, a medical student who is the first to take on the role of Demonhuntress in 1880s London, England, as she investigates the gruesome deaths and dissections of young women in the area. I don’t want to give very much away plotwise, as Paulus has made the comic freely available to read on his website [here’s the link – Ed].

So, what did I think? The first thing that caught my eye is the interior artwork, also done by Paulus, which is much more painterly than you’d expect from a comic. It looks like it’s done in pencil and watercolour, with a unique drawing style, intricate detail and expressive faces, and the shading, especially on the shadows and black clothes so prevalent in that era, is really well done. The story too had a strong concept, being a twist on the Jack the Ripper trope that goes far beyond the serial murderer that we’re used to. 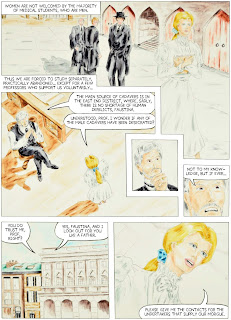 I did enjoy the story, it was highly entertaining and full of action, and I found the lead character, who also narrates the tale in the first person, to be a wilful and engaging lady who is not afraid to stand up for herself. Comparisons will inevitably be made with a certain Vampire Slayer but I think this lady, her style and story, are different enough for the concept to still work.  I did find the language used in the dialogue a little awkward in places, although in general it seemed to fit her character, as it is explained that she is not from England in the story. The main issue for me was on one or two of the larger individual panel pages, I found the layout of the narration boxes a little difficult to follow, as there didn’t seem to be an intuitive path one to the next, and for me that interrupted the flow of the story as I had to pause and re-read several times to catch the general gist. Also, the fighting sound effects, for me, didn’t stand out enough to be part of the narrative, they were part of the picture moreso, and would have benefitted from ink lining – but that’s just me.

All in all though, if this is the standard of storyline and characters that we can expect from the full volumes of The Demonhuntress, they are definitely going to be worth seeking out [the first volume is available now and the second is due sometime this year – Ed]. In the meantime, do go and download this freebie from Paulus and enjoy some 19th century kick-demon action.