Audio - Doctor Who: Invaders from Mars 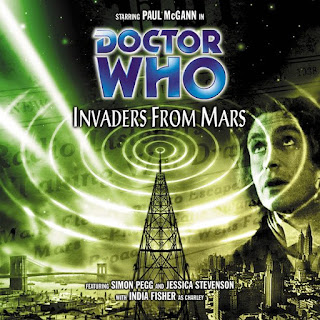 Our Doctor Who audio expert, Tony Cross, delves into the back catalogue available from the Big Finish website. Today is the Eighth Doctor and Charly adventure Invaders from Mars...

This is fun this.

The Doctor and Charley arrive in New York, 1938 and - as is the Doctor's wont - they stumble across a corpse. A corpse that seems to have been zapped. An investigation begins that will eventually involve gangsters, Nazi's and their sympathetic friend Cosmo Divine (John Arthur), the CIA, the Russkies, some rather pathetic aliens and Orson Welles.

It's snappy, punchy and funny. Mark Gatiss, who wrote this, seems to be having a great deal of fun. I'm surprised that he didn't have a go at playing Cosmo himself, as it is the kind of part, he'd have realised getting his teeth into, but even multi-tasking genii can't be everywhere at once.

There's a lot of well-known actors in this. Jessica Stevenson - as she was then - plays Glory Bee, the lady looking for her Uncle Professor Stepashin. Glory Bee turns out, like a lot of damsels in film noir, to have secrets.

Stephenson's 'Spaced' compadre Simon Pegg plays Don Chaney, a surprisingly patriotic gangster. Like Stevenson he puts in an excellent performance and if I hadn't looked at the credits, I don't think I'd have guessed who it was.

Paul Putner - unsung hero of many a British sketch show and comedy - plays Bix Biro, who meets an unpleasant fate. I think he also plays one of the aliens Destroyer Streath (though I could be wrong). The reason I think that is Putner's Destroyer voice is not a million miles from his Curious Orange/Davros gurgle when performance with Lee & Herring.

In fact, the aliens, whose name I did hear but never wrote down. (And I call myself a critic. Well, not really but research. It's quite important.) Anyway...the aliens are a highlight in this story as they're a pretty weedy pair scuttling about the universe looking for under-developed planets to torment as - and the Doctor has them bang to rights here - an intergalactic protection racket. They're lack of genuine might means that the Doctor has a chance to bluff them off the Earth by using Orson Welles's 'War of the Worlds' to convince them that a larger, nastier group of aliens have already arrived. And it would have worked if it wasn't for an over-looked red light & a dash of over-confidence.

In the end a more drastic method is used to destroy their ship, which is a little bit of a shame because it seems such a commonplace ending to a rather jolly romp.

David Benson & Jonathan Rigby do a fine job of bringing Orson Welles & John Houseman to life. Orson Welles is something of a...hero isn't quite the right word...person of interest...to me and it was a nice touch bringing him and the Doctor together, even for a short time. There's also a nice throwaway George Colouris/Doctor Who in-joke that I could ruin by repeating but I won't.

Paul McGann's Doctor has a boyish enthusiasm and a willingness to throw himself in at the deep end, which this story allows him to have a great deal of fun doing. In fact, although the world appears to be at peril, there's a real lightness of touch about this. It feels like a Hartnell historical: The Romans or The Time Meddler perhaps, which is a compliment and a half.

Of the Big Finish Eight Doctor stories I've listened to so far this might not quite be the best, but it is certainly the most fun. Give it a listen.