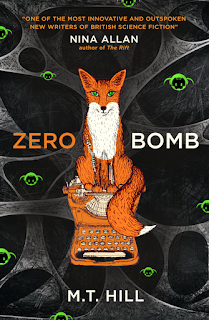 "A poignant near future exploration of society’s relationship to technology, and each other," Titan Books announce the publication next month of Zero Bomb by M T Hill...

Philip K. Dick Award nominee M.T. Hill takes a haunting and timely look at a Britain that could be closer than we want to believe. Tackling real-world issues of increased automation and state surveillance, Zero Bomb asks what happens to society when technology replaces the need to work.

The near future. Following the death of his daughter Martha, Remi flees the north of England for London. Here he tries to rebuild his life as a cycle courier, delivering subversive documents under the nose of an all-seeing state. But when a driverless car attempts to run him over, Remi soon discovers that his old life will not let him move on so easily. Someone is leaving coded messages for Remi across the city, and they seem to suggest that Martha is not dead at all.

Unsure what to believe, and increasingly unable to trust his memory, Remi is slowly drawn into the web of a dangerous radical whose ‘70s sci-fi novel is now a manifesto for direct action against automation, technology, and England itself.

The deal? Remi can see Martha again – if he joins the cause.

Part speculative science fiction, part page-turning thriller, Hill captures a glimpse of a world society stands on the brink of in a story about identity, family, technology and memory. This unsettling vision of the UK filtered through a kaleidoscope of current day issues marks Hill as an exciting contemporary voice in the genre alongside authors such as Charlie Jane Anders, Jeff Vandermeer and China Miéville.

M.T. HILL was born in 1984 and grew up in Tameside, Greater Manchester. He is the author of two novels set in a collapsing future Britain: Dundee International Book Prize 2012 finalist The Folded Man, and 2016 Philip K. Dick Award nominee Graft. He lives on the edge of the Peak District with his wife and son.