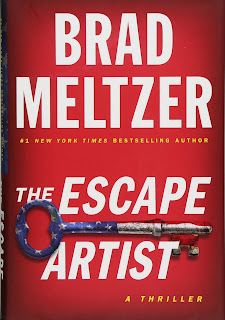 Death is just another way to disappear.

Two hours outside of Washington, DC is the mortuary for the U.S. government's most top-secret and high-profile cases. America's most important funeral home. To work there, mortician Jim "Zig" Zigarowski has one rule: never let a case get personal. But when a new body arrives--of young female sergeant Nola Brown, who was a childhood friend of Zig's daughter--Zig can't help himself. Looking closely at Nola's body, he realizes immediately: this isn't Nola. Indeed, his daughter's friend is still alive. And on the run. Zig's discovery reveals a sleight of hand being played at the highest levels of power--and traces back through history to a man named Harry Houdini. "Nola, you were right. Keep running."

I’ve always liked Brad Meltzer novels ever since I read The Millionaires way back when. He is a writer that grips by using history, by mixing the factual into his fiction, and by building characters you just cant help rooting for. In The Escape Artist, Meltzer takes on the themes of death, disappearance, abuse, guilt, and relationships and builds a military thriller upon those foundations. One of his main characters, Jim ‘Zig’ Zigarowski, is a real-life mortician at Dover Air Base and it’s the access that Meltzer had to this extraordinary man and his stories that hold the thriller in reality even when it's tipping towards the ridiculous, and Zig acts almost as your narrator throughout. He explains the ins and outs, the intricacies of the military and the mortician aspects, so at no point as a reader did I think I was lacking in any relevant background required to follow the plot. I was also left wanting to know more about the real Zig which was probably the point. The character of Nola I found fascinating and hope that Meltzer uses her in future books because, even though there is so much given here about Nola, I sense more to come. From her position as Artist in residence for the U.S. Military, through her heart-breaking but essential childhood, to her relationship with Zig, whenever it was Nola’s turn on the page I was enthralled.

As with all Meltzer books though, and especially The Culper Ring novels, it is Meltzer’s grasp of history and conspiracy that makes his novels stand out. If you have ever seen Meltzer’s work on television or read History Decoded: The 10 Greatest Conspiracies of All Time, you will know that his incredible research and almost detective’s brain unearths nuggets of historical fact that on occasion startle but often would just be quite interesting in the hands of a lesser writer, however Meltzer takes these facts and builds actual intrigue and plot from them. I had no idea that Houdini was so embedded in American political history, and you probably didn’t either, I certainly wouldn’t have guessed that you could take that fact and make it three quarters of your main plot and make something so old feel so fresh and new, something so true seem so fictional. Yet again, Meltzer educates as much as he entertains.

The Escape Artist is Meltzer at his glorious best, fast paced, enthralling, historically and fictionally gripping, with central characters you can't help but want to know more about in follow up books.