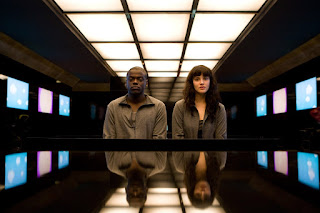 Kraig Taylor-Bryant reflects on the original series of Black Mirror, with a look at the episode Fifteen Million Merits...

Following the highly enjoyable “Bandersnatch” episode of the thought provoking and rewatchable “Black Mirror” Netflix series, I thought I’d delve deeper into what else this show has in store, by starting from the beginning. In case you didn’t know, each episode of Black Mirror is unique, and tells its own story, with no connection between them all, except for the fact that they tend to explore issues that we are dealing with on a daily basis, with a more fictional twist to it. I felt that there wasn’t much analysis to be had on the very first episode “The National Anthem”, which seems to just be based on the rumour surrounding David Cameron and a pig (though strangely enough this episode came out before that rumour arose). Anyway, I skipped on to the plot of “Fifteen Million Merits”, before starting to break it down a bit.

The plot follows the character of Bing (Daniel Kaluuya, and his relationship with a girl named Abi (Jessica Brown Findlay). Bing is living a fairly normal life, though doesn’t seem to talk at all until he meets Abi. When he meets her he realises how good of a singer she is, and wants to help her become a star, to escape this tiring routine that they seem to be in at the moment, where they constantly use exercise bikes whilst watching tv, or playing games, to earn “Merits”, which they can then spend on one item of food on a vending machine. This is before they are subjected to constant TV, and adverts, including those of sexual content, before going to bed.

Now, because Bing’s brother recently passed away, he had been left an exceptional amount of “15 Million Merits” in his brother’s will, which just happens to be the cost for entrance into the singing competition, as advertised on the TV’s in everyone’s room in this strange complex. So, Bing decided to gift a ticket to enter the competition to Abi, not only because he sees the potential in her, but because he seems to have feelings for her. Though unfortunately, because of the day and age that this episode is set, there are so many people that enter this show that the judges think that there are just too many singers to let another one become a star, as they see singers as getting too commonplace, in terms of entertainment value. Therefore, they take advantage of Abi’s appearance and offer her the chance to be a part of a sexually explicit show of sorts and, through much pressure put on her by the audience, she accepts, but also partly because she wants to leave the laborious life she’s currently forced to live. Bing becomes so angry at these judges that he saves up 15 million merits again, just so that he can come onto the show and yell at them for how they took advantage of Abi, and how they do the same to everyone. However, like everyone else, they take advantage of Bing and see the entertainment value in his speech and offer him the chance to make such speeches for a living on a live stream. Reluctantly he accepts, and this is where the show ends.

This episode seemed to resonate with me in more than one way. Not just in the sense that it seemed to deal with issues with society, but also humanity. During the episode, we witness three ways of living in this world that the writers created. There is the lower class, that seem to quite literally pick up after the middle class, the middle class, that seem to spend most of their days working, before going into a small room that they call home, and have to watch tonnes of adverts, and potentially a show, if they have the merits to buy one, before going to bed. And then we have the hierarchy. They seem to live a life of luxury, where they are entertained by the middle class trying to become upper class, and live in big buildings overlooking the wilderness, that we see Bing catching a glimpse of at the end of the episode. 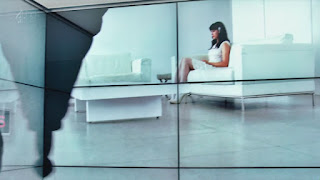 I think there’s many things about this system that are similar to how we live life today. I think that the lower class in this episode, are intended to represent the homeless people of our own society, that have to live off the scraps that people hand out to them through spare change. In a sense, I saw the fact that the lower class picking up the rubbish, as “living off of the scraps”, that homeless people have to deal with on a daily basis. And there was a certain character in this show that seems to mistreat overweight people, which seem to all be at a lower class than everyone else, in this show. So it not only represents how people of the higher classes can mistreat those who are lower class, or ignore them, but I think it also clearly shows how society can discriminate by a person’s physical appearance, which we constantly see in the media, as we all know that those with the “best body”, tend to be on the front of the newspapers.

And the middle class seem to be better off, in terms of being in shape. Though in a way, the show deals with the struggles of the middle class too, because they must work long hours before getting a little time to themselves before going to bed. The show also deals with how we are constantly bombarded by advertisements from companies higher up that want to take advantage of the employed middle class. That became quite clear to me, when Bing wants to skip an advert for a sexually explicit channel, but because he’s spent all of his credits he’s not allowed to skip the advert, or even look away from his screen, this really deals with a society that forces people to consume content, to make the rich people richer. Even when it comes to things like a simple vending machine, we see how much they struggle when they seem to only be able to get out one item, and the machine even seems to be broken, or have a fault with it, showing the conditions that even the middle class here has to deal with.

We don’t hear very much about the upper-class people, nor do we see very much of them. Though we do see how they manage to manipulate people, and use them for their own means, even those who call them out on their own actions, to make themselves richer. One of the instances where we clearly see this, is when its mentioned in the show how they power the spotlights, for each contestant on the show. That’s what made it clear to me that the middle class are contributing to the power supply of this world, whilst the upper-class do little work, and simply benefit from the work that everyone else does. And even when the judges offer Abbi the chance to become a “pornstar” essentially, they’re quite clearly taking advantage of her looks, so that they can benefit from her appearance, and make even more money, because that seems to be all they care about. Of course, I’m not saying all upper-class people are evil, I’m just saying that this show depicts those that do take advantage, and I think it’s very clever how it does this so subtly. Even when Bing confronts them about this, they don’t seem too afraid of the information he’s uncovered about this society, or the reality they live in, that he seems to be the only one who’s realised. The judges simply take advantage of him, like they do everyone else, and offer him the chance to be like them, and like anyone, he does, because it’s the struggles of day to day life that makes the working class (middle class) willing to do things such as this, to not have to worry about day to day things, such as if they have enough “merits” to make it through the day.

So I guess what I’m trying to say, is that I loved this episode because it very cleverly reveals the flaws in our own society, and shows the difficulties in trying to “make it”, but I think what its also saying is that this is future that we don’t want. Instead we should do our best to not lose ourselves, if we try to become successful, and remember that we all started somewhere, and should respect those that contribute the most, or have the most to deal with, in our society. So, I definitely think this episode, and the show itself, is worth watching all the way through, and I would recommend it to anyone that favours realism over the typical popcorn mainstream media we are exposed to nowadays.