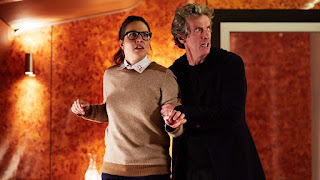 Our Doctor Who expert, Tony Cross, is journeying through all of time and space to bring us his thoughts on every available Doctor Episode. Today is the Twelfth Doctor adventures The Zygon Invasion and The Zygon Inversion...

This, for me, is really a story of two halves. The first episode has its moments but just seems to annoy the hell out of me for some reason.

Firstly, the Zygon’s additional powers. Why? You take a perfectly good Doctor Who monster, and you power it up. Not only can they now copy people’s body patterns, but they can copy people’s body patterns from memories. And from a long, long way away too. That makes them more difficult to kill because the last thing you want to do if you’re a soldier is be confronted by something that makes you think about what you are about to kill. But, why? It shows a distinct lack of faith in your choice of monster.

Secondly, why hire an actress like Rebecca Front and then give her next to bugger all to do. Oh, and add insult to injury by making her characters exit risible.

Thirdly, why is Clara a virtual superhero. I like Clara a lot, but she can resist Zygon podding – for want of a better word. Of course, the answer is that if she can’t resist podding then we miss out on some rather wonderful scenes between Clara and Zygon-Clara aka Bonnie aka Zygella.

Indeed, if The Zygon Invasion/Inversion does one thing it is to prove that Jenna Coleman is a bloody good actress. I forget, until I re-watch a Clara story how good she is. So, after all that negativity here’s some positivity.

I like to be positive about my Doctor Who, but I really struggled with The Zygon Invasion. Even as it built up to its rather fine cliffhanger. I kept wanting to skip through it. Plus, I’m pissed off at the way the killed off Jac (Jaye Griffiths). It’s like they felt someone in UNIT had to die but they didn’t want it to be anyone important. But she died and no one seemed to care. 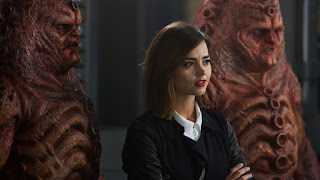 Which brings me on to something else: forgiveness. Forgiveness is a strong part of The Zygon Inversion. The Doctor’s willingness to forgive Bonnie for what she’s done is the foundation the return to the peace treaty is based on. What gives the Doctor that right? Bonnie has killed lots of people/Zygons, but the Doctor doesn’t even wipe her memory because he thinks she’s learned her lesson because she’s gone a bit Clara? I love the Doctor’s speech in The Zygon Inversion, but I’d like to see his point of view challenged a bit more and not by Bonnie but by Kate.

Kate’s lost soldiers and Jac – who I assume is a friend of sorts as well as a colleague. That’s not counting civilians or Zygons, but Kate gives in first to the Doctor’s blandishments.

Like the Thirteenth Doctor’s outright refusal to kill Tim Shaw – I’m jumping ahead here – I want to hear someone say, ‘Hang on, what gives you that right. What price will we pay for not killing him.’ And his willingness to forgive to the degree that Zygella goes from wanting war to being the new Osgood is miraculous. But perhaps that’s as much to do with Osgood trusting her as anything else, but still. That’s a leap in trust I’m not sure I’d be willing to make. The Doctor is obviously right when it comes to forgiveness being the foundation of peace, which is a lesson humanity seems keen not to ever learn. We prefer peace built on punishment. True forgiveness is hard, which is why I’d like the Doctor to get challenged or tested on it more thoroughly.

About Osgood: Ingrid Oliver is brilliant. The whole idea that she is unwilling to reveal whether she is Zygon or Human because she is the core part of how the peace is kept. And the Osgood Box is rather clever too. Your prize is not quite the prize you think it is.

Yes, the Doctor’s whole speech – and Capaldi’s performance – is brilliant. I’m a particular sucker for the moment he says, ‘And do you know what you do with all that pain? Shall I tell you where you put it? You hold it tight… till it burns your hand, and you say this: No one else will ever have to live like this! No one else will have to feel this pain! Not on my watch!’ That, more than anything else, seems to be the perfect explanation for the Doctor’s ‘mission’.

I’ve rambled on a lot about the bees that this story released in my bonnet, rather than giving a full review, which is what these articles are about really. Doctor Who is a television show that has had a lot written about it. If you want a breakdown of the storyline then they are easy enough to find. I write these articles because I love Doctor Who and I like to work out what the hell it is about each story that I like.