Doctor Who - Sleep No More 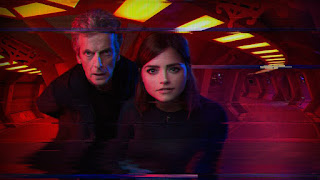 Our Doctor Who expert, Tony Cross, is journeying through all of time and space to bring us his thoughts on every available Doctor Episode. Today is the Twelfth Doctor adventure Sleep No More...

It’s funny how one’s opinions of a Doctor Who story can change on re-watch. I thought – on first watch – that this was the weakest story of Season Nine, which I think it still might be. But that isn’t because it isn’t an interesting episode. It just feels like it needs a second episode to finish telling the story. We’re left, at the end, without a solution to the monster’s plan. The Doctor has escaped, and the Sandmen look like they’ve got their little plan off and running. Their electronic infection is out there. It’s infected Clara. And Nagata (Elaine Tan).

I was about to say ‘but’ then. But I realised that I seem to use ‘but’ a ridiculous amount in my reviews. If I read the other one from today, which is on The Zygon Invasion-The Zygon Inversion I bet there are ‘buts’ scattered throughout that. Why? Perhaps it is because I write these articles in the immediate aftermath of watching the episode. They’re stream of consciousness, if one wants to be pretentious about it, which mean that I’m thinking as I go. That means a constant questioning of each thought. Perhaps that’s why all the ‘buts’ are there.

Written by Mark Gatiss, Sleep No More, is a base under siege story that teeters on being properly horrific. A sort of shadow copy of ‘The Ark in Space’, except there’s no Noah who manages to cling onto his humanity despite his metamorphosis. No, in ‘Sleep No More’ things are a lot bleaker. This is no indomitable human race. This is a skulking, greedy scientist who has given up on his species altogether, Rasmussen (Reece Shearsmith). He couldn’t even save himself, let alone the rest of the human race.

This is the 38th century. We get a little world building, which indicates that an Indo-Japanese super state is the superpower. Except for Capaldi, Coleman, Shearsmith and Bethany Black the rest of the caste are of Asian descent (and I use Asian here to cover the whole continent, not just India/Pakistan.) Even if the accents all seem to be English dialects, like Nakata’s Geordie. There’s probably a reason for that.

I should mention Bethany Black, who plays the ‘grunt’ 474. ‘Grunts’ are grown to be soldiers. Their intelligence is low and their strength high. Black is the first openly transgender actor to appear in Doctor Who. It’s a fine performance in a limited part. I wish though – having seen Black in Cucumber and Banana – that she’d been given a part with more to it. However, she gets a heroic death so what more can one ask for.

The guest cast – apart from Shearsmith – all have limited parts though as they seem destined to die in the usual way of minor guest parts in base under siege stories. I do want to stop though and applaud Paul Courtney-Hyu’s (who is playing Deep Ando) acting when he’s trying to get into a safe room whilst the computer – which was apparently reprogrammed at the Christmas Party to require everyone to sing THE song for access. It’s both comic and beautifully tense at the same time.

Capaldi and Coleman are up to their usual standards. I genuinely think Capaldi is the best actor to have played the part of Doctor Who.* I know there’s many rivals to that title, particularly Troughton. Yet I’m going to stick to my guns on this one. Capaldi’s Doctor is my favourite Doctor. Tom Baker will always be MY Doctor, because he was my first Doctor and I grew up watching him. If I’m feeling down it is always a Tom Baker Doctor Who story that I’ll reach for. If I’m feeling really down it will be ‘The Horns of Nimon.’**

So, although this isn’t a story I think is amazing, I’m a little baffled why I disliked it so much on first watch. The director, Justin Molotnikov, does good work bring Gatiss’s ideas to life. I suspect this was a cheap episode to make with its bog-standard space station sets, which are mostly dimly lit to hide a multitude of sins.

Perhaps it is simply that Gatiss’ desire for a clever pay-off meant it seems not to have an ending. I’m not sure a second episode would have been justified. It does need something, however. Or is that just me. Maybe I should be content to leave loose threads dangling. Not everything has to be wrapped up in a neat bundle to be perfect.