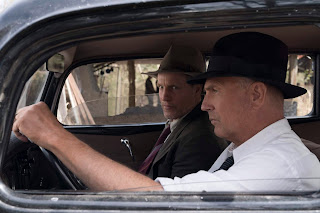 The outlaws made headlines. The lawmen made history. Watch the trailer for The Highwaymen, coming to Netflix March 29th...

From director John Lee Hancock (The Blind Side), The Highwaymen follows the untold true story of the legendary lawmen who brought down Bonnie and Clyde. When the full force of the FBI and the latest forensic technology aren’t enough to capture the nation’s most notorious criminals, two former Texas Rangers (Kevin Costner and Woody Harrelson) must rely on their gut instincts and old school skills to get the job done. The Highwaymen also stars Kathy Bates, John Carroll Lynch, and Kim Dickens.

Based on true events, The Highwaymen is the story of Texas Rangers Frank Hamer (Kevin Costner) and Maney Gault (Woody Harrelson) who are drawn out of retirement in a last-ditch effort to hunt down Bonnie and Clyde.

Producer Casey Silver initially commissioned the script from writer John Fusco about fifteen years ago, as a potential Robert Redford-Paul Newman vehicle. “John knew all about Frank Hamer, a famous and revered lawman in Texas, and he wanted to do an honest, truthful story about this legendary man,” recalls Silver of the pitch. “He spent time with Frank Hamer Jr. for material to write the script, and I remember him telling me about their bourbon and steak lunch, as the son recounted his father’s well-earned mythology. The Highwaymen breaks with the traditional ode to Bonnie and Clyde and is inspired by the extraordinary lives of Hamer and Gault.”

“I’ve always been fascinated with American history, particularly what’s under the veneer of myth and folklore,” admits Fusco, who has a penchant for the American West. He grew up studying historic photos of outlaws, gangsters, and itinerant bluesmen, trying to penetrate the romanticized legends built around those characters. This same curiosity was sparked by the glamour shots of Bonnie and Clyde posing with shotguns on the hood of a stolen car. “I dug into the research and found that not only are they reported to have killed 13 people during their reign of terror, but the true hero was a retired Texas Ranger - who was friends with Pancho Villa, hailed from the rough and wild days of the West, and patrolled border towns on horseback with a Winchester – a man named Frank Hamer.”

Image - Hilary B Gayle/SMPSP
Email ThisBlogThis!Share to TwitterShare to Facebook