Doctor Who - Face the Raven 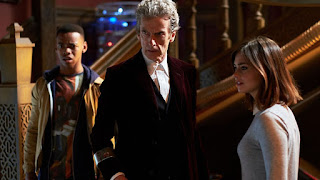 Our Doctor Who expert, Tony Cross, is journeying through all of time and space to bring us his thoughts on every available Doctor Episode. Today's first article is the Twelfth Doctor adventure Face the Raven...

First, a little preamble. When it comes to the final three episodes of Series 9 I had to make a decision about whether these were three separate stories or one three part story. Or something else. So, I made the entirely arbitrary decision to write three separate articles even though I consider Face the Raven/Heaven Sent and Hell Bent to be one single story, which deserves an over-arching title but that I can’t think of one. In a way these three stories are a little like The Invasion of Time (which is a comparison I think might never have been made before) in that although it is a six-part story, the first two episodes are quick and easy chance for the Doctor to show what he is capable of before the final four episodes are a different thing altogether, but it is still one story.

Now, as I said this is an arbitrary decision. Perhaps the logical one would have been to do two articles. One for Face the Raven and another for Heaven Sent/Hell Bent. However – and this is where the true arbitrariness comes in – I think Heaven Sent deserves a whole article of its own because not doing so is unfair – SPOILERS - on one of the best Doctor Who episodes ever made. Of which more later.

What of Face the Raven?

Well, it is rather good. The price of Clara’s behaviour since the death of Danny comes home to roost. She’s ‘gone native’. She thinks she’s the Doctor and can run around like the Doctor. The risk has become an addiction. Her fate in Face the Raven is the result.

And it begins with a call from Rigsy (Joivian Wade) from Flatline. He has a new tattoo on his neck. It isn’t a normal tattoo though. It’s a countdown. But, a countdown to what? Well, it turns out it is a countdown to death.

The Doctor and Clara trace his movements from the previous day and find a ‘trap street’. Now, in the real world a ‘trap street’ is just the name for a false street added to a map by a cartographer to catch out copyright thieves. In Doctor Who this ‘trap street’ is a real street. It’s where a small cluster of aliens have hidden – mostly after getting caught up with the Doctor in some way or another – and the street has a Mayor. That Mayor is Me/Ashildr (Maisie Williams). The ‘trap street’ it turns out is also an actual trap.

Rigsy was the bait to bring the Doctor here. He has been accused of a terrible crime, for which death by Quantum Shade (in the form of a raven) is the sentence. Unfortunately, Clara has done something terrible. She has taken Rigsy’s tattoo (and therefore his sentence) onboard. She thinks that the Doctor will come up with a solution, but he can’t. Me/Ashildr can’t undo it either. Clara is going to die. And whoever trapped the Doctor is going to take him away, with his confession dial.

The last ten minutes or so of this story are fantastically acted. By Capaldi, by Coleman and by Maisie Williams. The Doctor’s anger at Me/Ashildr when he realises what is happening is something to behold, but Clara’s response is equally powerful. She doesn’t want him like this. She doesn’t want her death to be the cause of him no longer being the Doctor. It’s so well-written and well-played by both that it is almost unbearable. I won’t pretend I didn’t cry. I did. And Maisie Williams is equally strong as she realises what has happened. There’s a moment when The Doctor is raging, and he lifts his hand and Me/Ashildr flinches as if she’s expecting to be slapped. It’s a real revelation of what Me/Ashildr fears the Doctor to be capable of in that mood.

Then Clara faces the raven. For all it’s darkness it is a strong end to Clara’s story. The hint that perhaps this is what she wanted is a gentle one, but it is there. And it is played so well. I really can’t understand why people find Clara so annoying when Coleman is so good, but each to their own.

And the Doctor is trapped.

But before he goes, he gets a nice, short speech that ends, ‘You’ll find the universe is a very small place when I’m angry with you.’ It’s a terrifying threat delivered so quietly that it feels even more frightening. Despite what Clara say about the Doctor’s reign of terror ending at the first crying child Capaldi’s performance makes you wonder about that. I’ve said before that sometimes the line between the Doctor and the Master is a fine one indeed.

So, Face the Raven, is rather good. It’s well-directed by Justin Molotnikov and Sarah Dollard’s script sparkles (from the light off my tears.) Series 9 is ending on a high note.