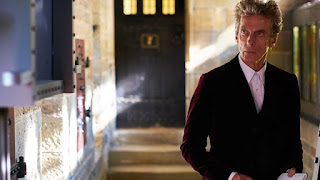 Our Doctor Who expert, Tony Cross, is journeying through all of time and space to bring us his thoughts on every available Doctor Episode. Today's second article is the Twelfth Doctor adventure Heaven Sent...

It’s a full-on exploration of grief and loss that you’d never expect from Doctor Who, which as I’ve often said, is often quite glib when it comes to death. People die all the time in Doctor Who and hardly anyone ever really cares. But then if they did this wouldn’t be Doctor Who would it. It would be one of the bleakest television shows ever made. And we get a hint at that here, although this story is also a tribute to the Doctor’s own strength in a way. He nearly breaks here. Nearly. But not quite. At the end he’s arrived somewhere, and he’s emerged, if not victorious but focused from his trial.

Indeed, Heaven Sent truly is the Trial of a Time Lord. For the Doctor is truly tested. Is he found wanting? Well, we shall see.

This story, written by Steven Moffat and directed by Rachel Talalay, features only two actors (and one small child right at the end.) And only one of those, Peter Capaldi, speaks. The other is the slow, silent Veil (Jami Reid-Quarrell). The Veil lurks and reaches to great effect, but this is the Peter Capaldi solo performance and it is brilliant. I am still genuinely raging that his performance in this story went unrecognised at any acting awards. If there was an actor anyway in anything doing a better job than Capaldi in this story, then I’d like to see it. It’s almost as if it was ‘just Doctor Who’, which means it is undeserving of praise. Indeed, this just re-kindles my rage about how the whole Capaldi era was handled by the BBC. How half-arsed the publicity was. How no one seemed to care about it anymore. It genuinely felt – at points – like the fag end of Classic Who when the people running the BBC couldn’t give a toss anymore. Then up pops Jodie Whittaker** and everyone wakes up again.

The Doctor is trapped inside a castle. A castle whose walls move. The castle is ‘haunted’ by the Veil. The purpose of all this is to get the Doctor to reveal what he knows about something important, The Hybrid. To do this the Doctor’s unseen jailers are prepared to let him die – over & over again. But then the Doctor finds a way out that is both a real wall of crystal and a metaphor for persistence overcoming resistance (to use a horrible phrase I learned a long time ago in sales training.)

Talalay’s direction is superb, especially during the montage sequence as the Doctor repeats his days over and over again creeping closer to escape. This story establishes her as one of the great directors of Doctor Who and there’s more to come. If there’s a story I’d love to see the workings behind it is this one. From Steven Moffat’s decision to write it this way through to the end.

You get the impression at points in this story that the Doctor has given up. He wants to lose. He wants to be left alone to die. He doesn’t want to be the Doctor anymore, but the ghost of Clara past (if ghost is the correct term) is there to remind him of who he is. It’s the sequence inside the Doctor’s TARDIS ‘mind palace’ that bring some of the strongest moments. The one that always gets me – as it seems to summarize grief – is when The Doctor says, ‘But you still won’t be there…’ It’s remarkable acting in a remarkable story.

And then when the Doctor escapes you get one of the great moments of modern Doctor Who. And a stonkingly good cliffhanger. There’s a lot happening here.

To conclude – he says clunkingly – this is one of the great Doctor Who episodes of all time. It’s got the best performance you’ll see from any actor who has played the Doctor in it and it is has things to say about grief that Doctor Who has ignored completely up until now. Why does no one mourn anyone in Doctor Who (or hardly ever)? Well, because – as I said earlier – it wouldn’t be Doctor Who anymore but occasionally it is worth stopping to do so. It makes everything feel more real.


*Not fact. Opinion. Obviously.
**That’s not a criticism of Jodie btw. Who I think is great.