Film - Fighting with My Family 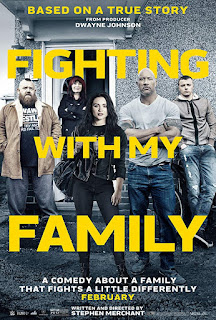 Get ready to rumble as Kraig Taylor-Bryant takes a look at some of the themes in the film Fighting With My Family...

Now, this is a film that I hadn’t highly anticipated. It is based on wrestling, and the whole “wrestling” thing just didn’t really seem to resonate with me growing up, and doesn’t really seem to now, mostly because I sort of figured out it was fake at a young age. However, after watching Fighting With My Family and a lot of the circumstances in it, the messages that the writers promote for the audience are what made this film, and the wrestling profession, seem very real, so they invoked real emotion in me, unlike typical wrestling, mostly because Fighting With My Family is based on a true story.

The film quite clearly promotes the message of gender equality, much like how many films do nowadays. However I think this film does a much better job than most others, because I think a good majority have either been films with female roles forced into the story of a male-centric film, or they just remake an older film with female main characters instead of males. But this film, much like the female-centric stories that are more original, is different. It’s founded on a story that is intended to focus on a female main character, and it's based on an actual person, who is a strong female role model and that’s why it works.

This film starts in the city of Norwich, introducing us to a family of wrestlers that have fallen on hard times. The family appears to be trying to keep away from law breaking by trying to encourage their children to ‘make it’ in the wrestling business. The characters of Zak (Jack Lowden/Thomas Whilley) and his sister Saraya (Florence Pugh/Tori Ross) are first introduced to us, with Zak seeming to have a larger interest wrestling than Saraya, his sister only showing an interest in wrestling from the fights that she got into with her brother going up.

What this story does very well is tell a true story with a message that some people aren’t meant to achieve certain dreams, no matter how much they want them, and that’s not a story that we see often in films. It tells us that sometimes we want to do something just because we enjoy it and not because it’s something that we were "meant" to do. It’s pretty clear why the media doesn’t want to tell this story often, because it is fair to assume that it’s not what the audience wants to see, but I think the realisation of this, for both the audience and the characters in this film, is what makes it stand out. So, you could say that this film defies expectation, because the media has almost conditioned us to believe that because we love something, then we can make a career from it. But I still think this opposite view is an important story to be told.

The way the film makes us think that this story is based on both Zack and Saraya, makes it all the more surprising when only Saraya is chosen to go on to become a wrestler or, at least, to train in Florida, to potentially become one. I think this is another example of how this film defies expectation. It shows the difference between having a skill in an area, and just truly loving something, because it was pretty clear that Zak cared more about becoming a wrestler, but he just didn’t have the right skill to become one.

When Saraya (who later picks her wrestler name “Paige”) is chosen, we see an interesting parallel between Zack and Saraya. Throughout the film from this point, we get to see how Zack has to deal with not being able to achieve his dream, and how Saraya is struggling to achieve her dream, their fates are essentially mirrored, by how one has to fight to cope with not becoming anything more than themselves, mirrored with fighting to become better than themselves.

Later in the movie though, Zak becomes the character that encourages Saraya to keep going through her training to become a success. And I think that’s the moment where we realise what his purpose in life is, to help others achieve. Leading to that though there are moments of conflict between Saraya and Zak, with Zak struggling with the jealousy of witnessing Saraya achieving “his dream”, one that he’s essentially been dreaming of for longer. Though as I said he eventually accepts this and the fact that he already had a good life at home, which helps him develop into the guy that encourages her.

Through Zak and the character of Hutch Morgan, Saraya’s trainer, the film explores how success can come out of failure, in different ways. Zak throughout this film, shows his anger, and his desire to be violent in any form, when he doesn’t get given the chance to go to Florida to potentially train to become a wrestler. After all of this I think he shows his own success through failure when at the end of the film it sums up how the characters/people are doing now in real life. At this point we find out that Zak continues to train people to become wrestlers and was actually responsible for training a blind kid to become a wrestler, and I think its achievements like that which make it clear that training/teaching others is somewhat of an honour and a privilege, when you get to watch them become a success. And I think Zak found his own success when he ended up training other people to become famous wrestlers. What I was going to say, when talking about Hutch Morgan’s character was basically the same thing, because I think it’s so cleverly mirrored that Saraya’s trainer is basically the foreshadowing of what Zak will become. Morgan even says this himself to Saraya and she struggles to believe it, but what Saraya doesn’t realise, is that’s there is still success in training others to become a success. And what Zak didn’t actually realise, is that Zak already is the best person that he can be.

The story seems to also have the more general message about not judging a book by its cover, with characters such as “Kirsten”, one of the other girls training to become a wrestler, promoting this message. When Saraya first meets Kirsten, she seems to Judge Kirsten and her friends too harshly, when she first meets them, she mentions the fact that there are some girls who applied for wrestling that are only there because they’re ‘good looking dancers or cheer leaders or models’. And it’s after this that she seems to keep her distance somewhat from them, assuming that they’re the kind of girls that would gossip about others behind their backs. And when she hears them talking when they’re on a coach trip, she thinks that they’re talking about her, when in fact Kirsten is talking about her child, who isn’t has an illness of sorts. Kirsten then points out to Saraya, and us, that Saraya is the one that’s been cruel to them this whole time, and she’s been assuming that because of the way they dress, that they’re the kind of high school girls that would bully others, and who aren’t considerate. I think this message is important because you shouldn’t assume someone’s personality, just by their social class, or what some might consider “attractive looking” people, it doesn’t make them bullies, or inconsiderate towards others.

Even with Saraya herself, she experiences judgement from others by how short she is, when she’s training, or the way she dresses, by the other girls, or even when she’s practising trash talking as part of her WWE training, many of the audience implies that she’s not "attractive", showing that this is how Divas were initially represented in the WWE/wrestling industry, but I think that’s what helps to build on and inform us about why this film, and this story, was so important. Because it was Saraya/Paige that changed this industry, when she became loved by wrestling fans for other reasons than her appearance.