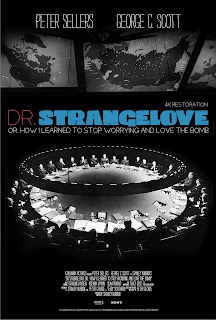 With the news this week that a 4k remaster of Doctor Strangelove is returning to UK cinemas in May, a reminder of Steve Taylor-Bryant's thoughts on the film...

Read the news about the film's re-release

Perhaps the title should actually be Dr. Strangelove or: How I Embraced The Irony and Learned To Love A Classic, because I didn’t get Strangelove on first viewing. The 1964 comedy was viewed in my household when I was fifteen years old. I liked Peter Sellars from Pink Panther films but just missed the entire point in Strangelove and therefore it was rubbish, the worst film ever, where’s my copy of Wayne’s World.

Then, as I finished my History exams and developed what would become a lifelong obsession, the love of American politics, I started to see a few things I recognised but couldn’t place why. As my life twisted and turned and took me everywhere and anywhere, I still kept reading voraciously everything I could find on U.S. politics, The Cold War and pretty much anything that was non-fiction and was considered, at that time, modern history. There were titles I don’t remember any more about the forming of the C.I.A, Nixon, Kennedy, Reagan, not so much about Ford and Carter, Vietnam and the odd relevant work of fiction which happened to include Two Hours To Doom by Peter George (My American friends, I believe that it was called Red Alert or something over there).

This is the first and possibly the most ironic fact, as I was loving a book that had inspired a film I thought was rubbish! Peter George’s 1958 Nuclear holocaust suspense thriller was the book behind Dr. Strangelove. Kubrick was originally going to make a serious adaptation but just kept seeing humour in the novel and so a comedic version was penned.

The basic premise for those who have not seen the film (and I really suggest you do!) is that a quite mad General, Jack D. Ripper (yes I laughed too), with an aversion to anything fluid except whole grain alcohol and rainwater, decides that the Russians and their vodka drinking communist ways must be stopped, so he launches an all out nuclear attack on the nation. News gets around that Ripper may have lost it and so various military personnel and the President of the United States of America, Merkin Muffley, convene a meeting in the Pentagon War Room.

During the meeting an attack is launched on the base where General Ripper was hiding out, with an Englishman as his captive, Group Captain Lionel Mandrake. The Russian Ambassador, Alexei de Sadesky, is invited into the war room as the Russian Premier will need to be contacted. Most of the planes involved on the attack that Ripper started are either destroyed or eventually recalled after Ripper takes his own life, but one plane, Alabama Angel, has no communications left. The planes had a system that should the communication systems become compromised a self destruct system will kick in. In another example of irony the self destruct had been damaged so self destructed, leaving the crew without anyway for them to be contacted by the panicky folk back in the War Room. The American President and his staff try in vain to contact the pilots before they drop their bomb and then conversation moves to how humanity can survive in mineshafts for a hundred years due to the devastation that is about to happen on the planets surface.

Peter Sellars plays three characters in Dr. Strangelove and shows what a vast array of talent he possessed as he took on the mantle of President, Group Captain and ex-Nazi scientist, the titular Strangelove, a man in a wheelchair whose right arm just cannot stop doing a Nazi salute. Ripper (Sterling Hayden) was played almost straight. There is irony all over these characters. There is a President that doesn’t have the authority he thinks he has, and discovers that fail-safes he put in place neither fail to stop attacks or are safe. An RAF Group Captain that discovers that the cancellation code needed to stop global destruction is Peace on Earth and then doesn’t have the money to call the War Room, and the future of mankind being planned by a Nazi scientist when the Americans themselves are the ones that bring about Armageddon? Well if you can’t see the irony in that fact I feel sorry for you.

Watching the film as an older man also allows me to pick up on things that I wouldn’t have noticed when I was young, whether I liked the film or not. James Earl Jones plays Lieutenant Lothar Zogg (now there’s a science fiction name if ever I heard one) and he is one of the crew responsible with making sure their nuclear payload hits its target. Yes, Darth Vadar is in the sky with the power to destroy a planet. Alderaan,I now know how you feel.

One of Ripper’s main concerns about the Russians was they are always drunk on vodka so, when the President finally gets through to his Russian compatriot, Dimitri, the irony that he is drunk and partying is also not lost on me. What happens next was one of the greatest one sided conversations in film history as Sellers has to placate Dimitri who is apparently upset that the President didn’t just call to say hello, whilst trying to explain about the problem in hand. The Russian Premier mentions another fail-safe that the Russians have in place and it is left to Ambassador Sadesky to explain the irony that an automated destruction plan, the Doomsday Device, cannot be switched off otherwise it will blow up. A protection system that is going to blow up either way? Classic.

Alongside the satire and irony are some magnificent performances. I have waxed lyrical about Sellars enough and, whilst all three of his characters steal their respective scenes, there are a couple of other actors involved that really need pointing out. The performance of Sterling Hayden as Ripper was played so deadpan straight you could have been forgiven for thinking he was in a serious film, not a comedy, and all his actions are displayed in that matter. His dialogue is superb. Being in a scene with Sellars, I would imagine, is not an easy thing to take part in and, whilst Sellars’ RAF man is overplayed and obviously comedic, Hayden performs as if he’s not part of the joke. The delivery of his views on women taking his essence through bodily fluids during the physical act of love is hilarious and yet spoken as if the man really believes it. Considering the character of Ripper was genuinely insane it was probably the most normal and calm performance in the entire film.

George C. Scott played General ‘Buck’ Turgidson, and whilst I have always loved Scott mainly for his voice in the likes of Patton and The Changeling, there is something extra in Strangelove that Scott brings to the table and that was his physical performance. There was the obvious calm in The War Room from Sellars’ President and obvious humour in the Nazi saluting of Sellars Strangelove but, considering this is 1964 and he wasn’t born yet, there are an awful lot of Jim Carrey style face movements and gestures in Scott. As the paranoia kicks in and Scott is asked if the plane has a chance of making its target, the whole physical gyration and manic voice as he lets slip the yes through emotion is what we love Carrey for at his best.

Last but not least is the cowboy leader of the Alabama Angel, hell bent on carrying out Ripper’s plan to hit Russia. This was Major ‘King’ Kong played by the superbly named Slim Pickens, himself a real life cowboy before acting cowboy style characters in Blazing Saddles and the like. The vision of him riding the bomb rodeo style as it drops on its target will stay with me forever. The irony that he controlled the plane they trying to stop and it was so damaged it could’ve given up had it not been for Kong and his determination is also not lost on me.

Well, boys, we got three engines out, we got more holes in us than a horse trader's mule, the radio is gone and we're leaking fuel and if we was flying any lower why we'd need sleigh bells on this thing... but we got one little budge on them Rooskies. At this height why they might harpoon us but they dang sure ain't gonna spot us on no radar screen! 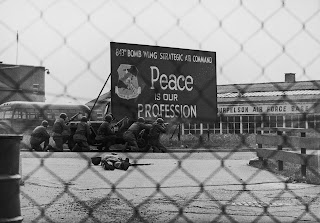 The film was written and produced in a time when nuclear destruction was a huge possibility, and whilst we live in safer times now, it is also a film you just couldn’t make today. Films today seem to be either full of CGI or written with winning an Oscar in mind, but it is Kubrick’s simplistic setting that allows this film to work. There was the interior of a plane, an office building, a gate to a military gate and The War Room itself, which was basically a hangar with a large table and some backlit screens as the Big Board (Sir, you can't let him in here. He'll see everything. He'll see the big board!) the type of sets you may find in modern day theatre but very rarely on film production. There was also the timing of the film. President Kennedy hadn’t been dead long and the stand-off with the Russians and Cuba was still fresh in the memory. The world was living in fear, a genuine fear mind you, not the media driven spin fear we supposedly live in now. As Dr. Strangelove was being released, children were still carrying out air raid drills, hiding under their school desks as if a piece of wood would stop nuclear annihilation.

There was also the humour. You don’t get comedy written like this anymore. I don’t know if that is because you don’t have performers like Peter Sellars anymore (I dare you to find a modern comparison!) or whether we just don’t want to bring on the wrath of a government anymore, the American Air Force were so anti this film it had to carry warnings it was only fiction before the film rolled.

It is the stated position of the U.S. Air Force that their safeguards would prevent the occurrence of such events as are depicted in this film. Furthermore, it should be noted that none of the characters portrayed in this film are meant to represent any real persons living or dead.

For these reasons there will never be a comedy of the epic nature of Dr. Strangelove Or: How I Learned To Stop Worrying And Love The Bomb. That is a poor fact for the new generation of film fans, and a shocking indictment against the studios of Hollywood, but it’s kind of nice that people can go and discover a film made eleven years before I was born and spend years growing to love it.

Now, no fighting in here, this is The War Room.

Park Circus, in collaboration with Sony Pictures Entertainment, have announced the re-release of Stanley Kubrick’s masterpiece Dr. Strangelove or: How I Learned to Stop Worrying and Love the Bomb (1964). Restored in 4K, the film will open in UK cinemas from 17th May 2019, including an extended run at the BFI Southbank as part of a special Kubrick season.

Stanley Kubrick Considers The Bomb, a new short film produced and directed by Matt Wells, will be screened exclusively in cinemas as part of this release. With contributions from those who knew Kubrick best, including Katharina Kubrick, Jan Harlan (Kubrick’s Executive Producer and brother-in-law) and journalist and author Eric Schlosser, the film considers how Kubrick responded to society’s widespread concern about nuclear war and transformed it into his irreverent comic masterpiece.
Follow Steve on Twitter @STBwrites