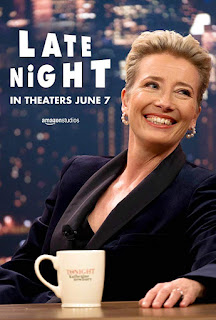 Fresh from its success at Sundance Film Festival, and starring Emma Thompson, watch the trailer for Late Night...

Katherine Newbury (Emma Thompson) is a pioneer and legendary host on the late-night talk-show circuit. When she’s accused of being a “woman who hates women,” she puts affirmative action on the to-do list, and—presto!—Molly (Mindy Kaling) is hired as the one woman in Katherine’s all-male writers’ room. But Molly might be too little too late, as the formidable Katherine also faces the reality of low ratings and a network that wants to replace her. Molly, wanting to prove she’s not simply a diversity hire who’s disrupting the comfort of the brotherhood, is determined to help Katherine by revitalizing her show and career—and possibly effect even bigger change at the same time.

Directed by Nisha Ganatra (Transparent, Mr Robot, You Me Her) from a screenplay by Mindy Kaling (The Office, The Mindy Project), Late Night is in cinemas from June 7th.