Project Meltzer - The Book of Lies 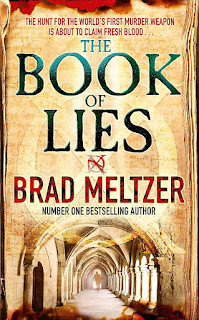 Steve Taylor-Bryant has given himself the reading challenge or reading every full length novel written by Brad Meltzer. He starts his epic task with The Book of Lies...

Sometimes an artist creates something that just shouldn’t work, something that has everything thrown at it and should be overwhelming in its ability to entertain or to grip you as a reader, but somehow, it’s just excellent because of this and not in spite of it. I start with this statement because The Book of Lies was my first experience of Brad Meltzer and my word does this novel have a lot going on, but to this day it’s still one of my favourite titles of his. There’s a pre-Nazi conspiracy with an ancient cult that manifests in the present, there’s the death of Superman creator Joe Siegel’s father Mitchell, which in turn takes a biblical conspiracy into the world of comic books whilst still operating as a kind of law enforcement thriller, whilst it deals with loss, guilt, familial estrangement, and murder.

In Chapter Four of the Bible, Cain kills Abel. It is the world's most famous murder. But the Bible is silent about one key detail: the weapon Cain used to kill his brother. That weapon is still lost to history.

In 1932, Mitchell Siegel was killed by three gunshots to his chest. While mourning, his son dreamed of a bulletproof man and created the world's greatest hero: Superman. And like Cain's murder weapon, the gun used in this unsolved murder has never been found.

Today in Fort Lauderdale, Florida, Cal Harper comes face-to-face with his own family tragedy: his long-missing father has been shot with a gun that traces back to Mitchell Siegel's 1932 murder. But soon after their surprising reunion, Cal and his father are attacked by a ruthless killer tattooed with the ancient markings of Cain.

So begins the chase for the world's first murder weapon. It is a race that will pull Cal back into his own past even as it propels him forward through the true story of Cain and Abel, an eighty-year-old unsolvable puzzle, and the deadly organization known for the past century as the Leadership.

What does Cain, history's greatest villain, have to do with Superman, the world's greatest hero? And what do two murders, committed thousands of years apart, have in common? This is the mystery.

You must admire the pure ambition shown here by Meltzer, there really is a lot happening on the surface, and so much more underneath and in lesser hands I would foresee this being a mess of a novel that never sees the light of day. However, Meltzer manages in the most part to tie everything together, keep the pace at an almost exhausting level, and make you root for the protagonist which is the whole point of a book is it not? The research that has gone into the Siegel family history and the effortless way that Meltzer has mixed their reality with his fiction is just stunning, and luckily at the end of the novel there is an afterword by Meltzer where he breaks down what is real Siegel lore and what he invented for the sake of the story, something that was needed by me as I couldn’t work out what was real and stopped trying, deciding instead to go along for the ride and see what washed out in the end. Cal Harper was a relatable protagonist, not a bad man at all but haunted by his past and there is a lot of that in all of us, but he strives to be a better man and that should be looked up to. The relationship with his father was a fascinating one to delve into, how the past, then a period of estrangement and then the emotions of a somewhat strange coming together all have an effect on both men and whilst I cant understand from first hand experience what that may be like, it felt real enough to me tug at my heart strings.

The sheer lunacy of the idea that you can find the world’s first murder weapons within a thriller is what grabbed my attention in the first place, and the bonus of tying that to the Superman creator and his family, his legacy, is what led me to first enjoy the The Book of Lies. For this project of reading all the Meltzer novels again my turn with The Book of Lies is my third time and I am still finding fascinating character traits I missed the first couple of times, I am still discovering more layers of depth than I initially gave the book credit for, and I still sit here in awe at the scope and the ambition attempted on the page. If you like thrillers with a little reality and conspiracy thrown in, then I cannot suggest The Book of Lies highly enough.