Women Behind the Screens - Interview with Kate Griffiths 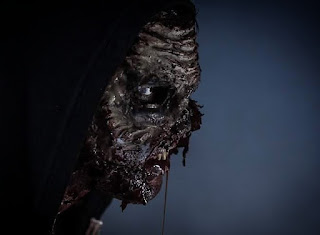 Today we celebrate the work and influence of Women Behind the Screens and Steve Taylor-Bryant managed to grab a chat with special effects makeup artist Kate Griffiths to discuss her amazing work thus far, what the future holds, and how it all began...

My work for the DreamCage Media Group affords me many luxuries. I get to see films and television often before a wider audience does, I get festival invitations, and on occasion I am allowed to talk to actual real people. I have spoken before of my love for A.D. Lane’s upcoming horror film Invasion of the Not Quite Dead and today I am privileged to spend some time talking to the woman responsible for taking Lane’s madness and making it visual. Kate Griffiths is an amazing artist and if you follow her social media accounts you too will be astounded by the magic she can perform to make something unimaginable look real. With over 15 years’ experience in the industry as a freelance Makeup Artist in Special Effects, Design and Makeup Application out on location, in the studio and in theatre, Kate’s extensive makeup kit enables her to work at short notice on projects across the UK for filmmakers, productions, agencies and event management. Knowing nothing about the trade doesn’t stop me from appreciating the work but I thought it was about time I learnt more and hopefully you will also get something from it.

How did you decide that this was going to be your job? Is there a person or event that led you up this path?

This wasn’t actually my job originally! I got to an age in my life where I realised that doing what I was doing fulltime (working in Speech & Language in primary education) wasn’t really hitting on my creativity so I found a course and took a year out to study Theatrical & Media Makeup. When I got to the SFX bit, I realised that I’d never go back to education. However, it took me another four years to build up a portfolio and some clients, then I gave up my job, pension, security – basically my life and became a freelance SFX artist. That was many years ago and I haven’t looked back since!

Who are your own heroes within your trade? What have they brought to the make up and effects arena that makes them stand out?

I think my first hero was Neill Gorton – I’d say he’s the top UK SFX artist and I guess I’ve chosen him for the reason that he made it bigtime in an industry dominated by US artists. He’s very giving with his knowledge and is incredibly talented and made SFX more accessible by sharing his knowledge – something that is actually quite common within this industry.

The realism shown in your work for school workshops is incredible, I never had anything like this when I was younger and can’t help imagining what might have been if someone as creative as you had paid a visit. When the students see what is achievable within make up and effects do you get a more involved experience with maybe one or two taking a genuine interest in it as a career?

I’ve been very fortunate to have found a niche working within mainstream education as well as working in film, tv, stage and media events. I suppose my educational background helped and I love being in the classroom sharing knowledge with young people. It’s such a visual subject and MAKEUP is part of the Performing Arts/Drama syllabus so I found this gap in the market and filled it and they love it! It’s a great feeling when you go into a classroom and within just a few minutes, even the ones with the shortest attention span are mesmerised! I’ve had several students go on to great things from having a taster day at school with me, so yes, it’s a really good feeling to hear them make it in their own right! I work with schools from grammars through to specialist units and tagged offenders and never found anyone who wasn’t animated by what they can achieve with me. 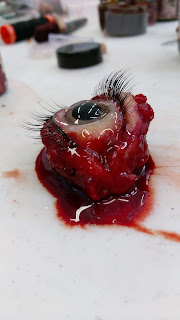 When you join a project how much collaboration is there with the filmmakers? Do you have a brief to follow or is there discussion where you can pick the best way to achieve their vision?

Generally it works that I receive a script, read through it, check out all the effects, chat with the producer (mainly because there’s such a tight budget when it comes to makeup!) and then I start to feed the director different ideas and designs and it all leads on from there! Lots of effects obviously have to be exactly according to the script but when it comes to something like creating a “new” creature, that’s when I get really creative! I love being given a free rein!

Is there a difference between preparing someone for a photo shoot and film work?

Yes, there’s a huge difference. We all work with HD film, so that’s now a given that all makeup has to be HDready – cameras will pick up every detail within the product. The difference between the makeup is the way the product is made – HD makeup particles are shaped differently so that they reflect light differently and don’t show up on camera – obviously you use different makeup for theatre than you would for film but now we need to think about whether the shot is going to be wide or tight and that defines how I do the makeup. For a photoshoot for media/editorial everything would need to be HD but if I’m doing a film and the camera angle is wide and the light is dim, then I don’t need to worry too much about the really fine detail which is why I need to work closely with the DOP and the director. With a tight shot, when the camera is really close the actor, then yes, the makeup has to be absolutely perfect.

You work on a fair bit of horror related work, obviously the make up and effects can have a huge impact within that genre, is that your favourite style of film to work on?

Yes – horror is definitely my bag! I love being able to shock people by just creating something that is really grotesque or bloody. However, horror filming isn’t where it ends…. I do a lot of work for the NHS here in the UK as I specialise in MOULAGE (the art of creating trauma injuries). I prepare the live accident victims for the doctor’s and medic’s final exams. I’ve studied anatomy and physiology in detail and work closely with the hospital consultants as each specific patient scenario has to look medially correct. Also, when I’m asked to cut through a body for a film, I need to know what’s inside the human body, how it will look if it’s fresh or old and how the blood the flow.

It’s really easy as a viewer to spot bad make up and effects, blood not looking like blood for example, but when I watch something that contains great work it’s so much part of the story it isn’t immediately clear to a viewer that it is because the make up and effects are so good. Does it worry you as an artist that if you do your job really well a viewer might not realise that it’s because of you? And how has the advent of CGI impacted the work you do, or maybe the work that is available to you?

I’m terrible at watching films as I see it from a totally different perspective than the average viewer. I guess that’s how I’ve learnt though – as I would hate someone to watch one of my films and has the whole experience ruined by bad makeup. I guess if viewers are not even thinking about the makeup, then you’ve done your job well! I get annoyed that the makeup artist is generally listed way, way down in the credits – even lower than the runner’s runner’s assistant! It’s a really skilled job and I think MUAs get very little credit for the amount of work they put in to make every scene look real. I’m fortunate that the directors that I work with (mainly I work on indie film) are fans of realism and don’t use CGI at all. I don’t think horror fans want CGI – as a viewer you can tell the difference. 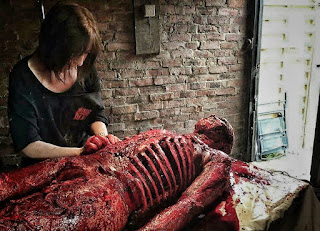 There’s a scene in Invasion with a skeleton corpse, firstly where on earth did the inkling that this was achievable come from? And what were the technical aspects you had to use to create the effect?

Ha!!! Antony D Lane and I work very, very closely together and he knows that if he says to me, Kate can you make something really awful, I’ll make it ten times worse than awful. I guess I just have the thoughts that anything is possible, even on a low/no budget. With that scene in Invasion I knew the body has to move, so the first thing Antony had to do was find an actor that would be happy for me to do anything on him/her. In fact, the actor came in for one scene and because she said she was happy for me to do that, we brought her back in and created the horrendous skeleton corpse. Technical aspects of that creation were really having a good butcher where I live who supplies me regularly with bones! I won’t go into too much detail as we haven’t released yet but let’s just say it wasn’t too “deer” to create!

Is that the biggest challenge you’ve had in your work thus far? If not, what is? And what’s the most unusual piece of art you’ve had to create?

I loved doing that scene for Invasion but to be honest, pretty much every scene in Invasion Of The Not Quite Dead has been fun for me! It was fun planning and creating it and then seeing it being filmed was great. Last year I created a truly awful creature for WINTERSKIN by Charlie Steeds (Dark Temple Motion Pictures) which is being released later this year… there are some photos of it on my Instagram (@katesfxmakeup) – take a look!

Is there a particular technique or product you’ve really been itching to try but haven’t had the chance to yet?

I’ve not done any animatronics – something I would love to train in and use but I would need a nice big workshop rather than just using my kitchen so…..

And finally, what is the biggest misconception people have about the job you do?

I guess it has to be that be that people think I just turn up, create and go…. In reality, there are hours and hours (often unpaid) of planning, prepping, ordering, designing, kit cleaning, driving and being cold, dirty and tired. However, all that aside, I love my job, love the people I meet, the weird and wonderful locations that I get to work in and am fortunate enough to get paid for it. I wouldn’t change it for the world – unless of course someone wants to pay me to go and lie on a hot beach under a palm tree with the sea lapping around my toes for a year or two…?