Project Meltzer – The Book of Fate 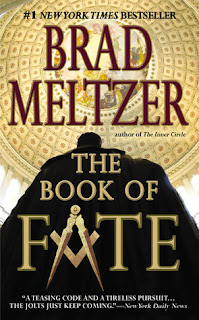 Steve Taylor-Bryant has given himself the reading challenge of reading every full length novel written by Brad Meltzer. This week it is the turn of political Freemason conspiracy novel The Book of Fate...

"Six minutes from now, one of us would be dead. None of us knew it was coming."

So says Wes Holloway, a young presidential aide, about the day he put Ron Boyle, the chief executive's oldest friend, into the president's limousine. By the trip's end, a crazed assassin would permanently disfigure Wes and kill Boyle. Now, eight years later, Boyle has been spotted alive. Trying to figure out what really happened takes Wes back into disturbing secrets buried in Freemason history, a decade-old presidential crossword puzzle, and a two-hundred-year-old code invented by Thomas Jefferson that conceals secrets worth dying for.

This is my third read of The Book of Fate but my first for review purposes and I wondered if reading Meltzer’s biggest book thus far in my project, and the one I knew the most other reviews for, would have any impact on my own dissection of the novel. Well, kind of. I didn’t so much take notes, the narrative moves fast in The Book of Fate and I didn’t want to be taken out of the story by constantly stopping, I just found myself wondering where all the Dan Brown comments from other people’s reviews had come from. Don’t get me wrong, I love Dan Brown he writes very easy to read thrillers that are just about smart enough that you could be left feeling dumb for a moment at the end of a book before moving on with your lives, but he does cram a lot of unproven conspiracy into his books for no more than marketing reasons as they rarely drive the plot. Here, Meltzer is using details of the political use of Freemasons, the legend of how long they have had their fingers in pie of world events, and how many old presidents have been Masons as essential elements of the plot, he is tying what is factually known to what is thought to be right together with his own reinvention of Washington lore and sewing all the elements together through a thriller that yes sometimes borders on the ridiculous but is in the main a taut and frantic piece of writing that you cannot help but get gripped by.

If The Book of Fate was a film, we would all be raving about it in the way we did when Disney’s National Treasure films were released, and it runs in a very visual way. Action scenes are described just enough that you get the gist of what is occurring, so your cinematic mind can fill in the rest, but the elements of the plot that require explanation are detailed and enthralling. It was also refreshing to read a novel about a former president from the point of view of failure. President Leland Manning didn’t keep his office, he lost the election due to the media portrayal of his actions during that opening scene. Maybe a little ahead of its time The Book of Fate shows the power of the media in making or breaking a reputation. If anyone was in doubt about the power of the media in our modern politics The Book of Fate shows just how their narrative or spin on a situation can have massive impacts of the society psyche.

The Book of Fate is a great thriller, a good action film waiting to happen, but it transcends the reviews it got at the time. It is more socially aware than any Dan Brown book. It deals with tragedy, the role of the media, corruption, mental health, physical disability and wraps all these serious subjects up in a highly palatable fast paced book. It is not Meltzer’s best book in my opinion but, as a practice run for the Culper Ring trilogy, it’s a blast.