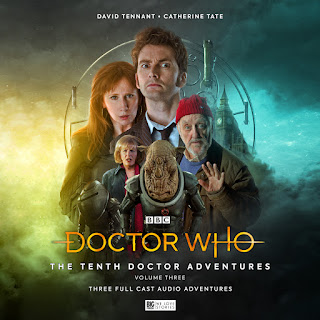 The Doctor and Donna return in The Tenth Doctor Adventures - Volume 3, released this Thursday, 16th May, thanks to Big Finish...

And they’re taking the family with them...

Alongside Jacqueline King, who will return as Sylvia Noble, Donna’s mother, also coming back to Big Finish after an eleven-year absence, Bernard Cribbins will reprise his role as Wilfred Mott, Donna’s grandfather.

Jacqueline King told us about returning to the role: “Doctor Who has been the gift that keeps on giving. I started, believing I was to appear in one Christmas episode, then was thrilled to appear in more. I recently returned to the role with Big Finish and it was like putting a cherished old sweater back on. That old sweater will have to be washed and conditioned ready for this episode with the A team back in full. Can’t believe my luck. I’m guessing it might actually feel a bit emotional.”

In the three new audio adventures included in Volume 3, we’ll pop back into history where menacing threats lurk in 1950s London’s smog in an entrancing tale by Roy Gill, we’ll explore dangerous underwater worlds with the Judoon in a thriller by Jenny T Colgan, and James Goss takes the Doctor, Donna and family on their most treacherous journey yet... into the horrifying world of reality television! 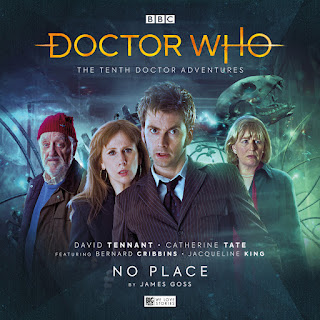 It's Haunted Makeovers! The home improvement show with a spooky twist.

The Noble family are hoping to cast out a few spirits along with the old bathroom suite, as presenter Justin joins Donna, Wilf, Sylvia and the Doctor for the latest edition of his reality TV series.

Of course, Justin knows that any supernatural phenomena can be faked. Ghosts can't possibly be real. 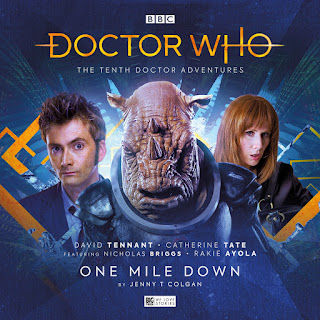 3.2 One Mile Down by Jenny T Colgan
Donna and the Doctor take a holiday - in the beautiful underwater city of Vallarasee.

Things have changed since the Doctor last swam through it: Vallarasee is now enclosed inside an airdome. Judoon patrol historic sites, and instead of tourists wearing helmets to breathe, the native Fins are forced to adapt.

But leaks have begun to trickle into the dome, and the Doctor and Donna must convince the Judoon that disaster is imminent. Or else thousands will be trapped, as the waters rise... 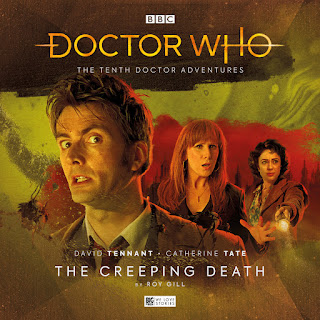 3.3 The Creeping Death by Roy Gill
London, 1952, and a deadly smog envelops the capital.

But something even more dangerous - and alien - is hiding within the mists.

When the Doctor and Donna get lost in the fog, they find a motley group of Londoners trying to make their way home.

Soon the stakes are raised, as death creeps along fume-choked streets, and not everyone will make it out alive....


“Three box sets in and my excitement about working on The Tenth Doctor Adventures is as strong as ever,” says producer David Richardson. “When we first started thinking about this new set of stories, I emailed Russell T Davies to ask about including Sylvia. He suggested we should try for Wilf too – it had never occurred to me that we might be able to get Bernard Cribbins involved. But a call to Bernard’s agent revealed how delighted he was by the prospect, and there we had it – the Noble family together again, nine years after they last appeared on TV.”

Doctor Who – The Tenth Doctor Adventures Volume Three (Limited Edition) is available now for pre-order. A five-disc collector’s edition – limited to 5,000 copies – is available on CD in deluxe bookset packaging for a pre-release price of £35, with the download version for £25.

Included with the limited edition CD release, Doctor Who and Blake’s 7 costume designer June Hudson has created costume designs for the creatures and aliens, and writer and SFX specialist Mike Tucker has created storyboards for the new stories. With behind-the-scenes interviews from some of the cast and crew as well, this limited edition makes for an unmissable audio package.

Big Finish Productions is an audio production company and publisher best known for its range of Doctor Who plays (with its many spin-offs). They also produce a wide range of audio drama and audiobooks featuring the characters from Blake’s 7, Dark Shadows, 2000AD (Judge Dredd and Strontium Dog), Terrahawks, The Avengers, The Prisoner, Survivors, The Omega Factor as well as classics such as HG Wells, Shakespeare, Sherlock Holmes, The Phantom of the Opera and Dorian Gray. Plus they produce original creations such as Graceless, Charlotte Pollard and The Adventures of Bernice Summerfield, plus the Big Finish Originals range featuring seven great new series including ATA Girl, Cicero and Jeremiah Bourne in Time.