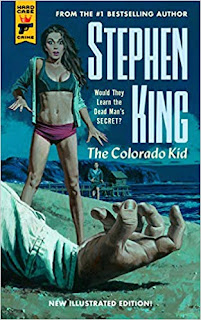 Hard Case Crime announce a July publication date, for the first time in the UK, of The Colorado Kid, a novel by Stephen King (yes, that Stephen King)...

In 2005, Stephen King put up-and-coming mystery imprint Hard Case Crime on the map when he decided to write a book for the line. That book, The Colorado Kid, a one-of-a-kind investigation of mystery stories themselves, won raves, landed on the New York Times Bestseller List, and inspired the TV series Haven, which ran for 6 years on the SyFy network. However, Hard Case Crime was only allowed to publish the book until 2008, and since then Stephen King has not authorized any other print publication of the book in the U.S.

Hard Case Crime is very pleased to announce that The Colorado Kid will return to bookstores in the U.S., for the first time in a decade, and with its first ever mainstream distribution in the UK, in May (US) and July (UK) 2019.

The new edition – the book’s first ever in the larger trade paperback format – will feature a brand new cover painting by popular Hard Case Crime artist Paul Mann, as well as 20 new interior illustrations by Mann, Mark Edward Geyer (who previously illustrated Stephen King’s The Green Mile, Rose Madder, and Elevation), Mark Summers (who previously illustrated Stephen King’s Joyland for Hard Case Crime), and Kate Kelton (who, in addition to her work as a gallery painter, appeared as an actress in Haven, the television adaptation of The Colorado Kid).

The book tells the story of two veteran newspapermen and their investigation into the mysterious death of a man on an island off the coast of Maine. How does a man wind up dead on a beach, alone, with no identification, two thousand miles from home? And what does it mean to grapple with questions like that, not knowing if you’ll ever learn the answers?

“From the day I first read the manuscript, I’ve loved this book,” said Hard Case Crime editor Charles Ardai. “It was a privilege to be The Colorado Kid’s first publisher and it is an honor to get to reintroduce it to readers, ten years later, in this very special new edition.”

When he wrote The Colorado Kid for Hard Case Crime, Stephen King said, "This is an exciting line of books, and I'm delighted to be a part of it. Hard Case Crime presents good, clean, bare-knuckled storytelling, and even though The Colorado Kid is probably more bleu than outright noir, I think it has some of those old-fashioned kick-ass story-telling virtues. It ought to; this is where I started out, and I’m pleased to be back."

Stephen King is one of the most acclaimed authors of all time, with more than 300 million books in print. In 2003, he received the National Book Foundation Medal for Distinguished Contribution to American Letters, and in 2014 he was awarded the National Medal of Arts.