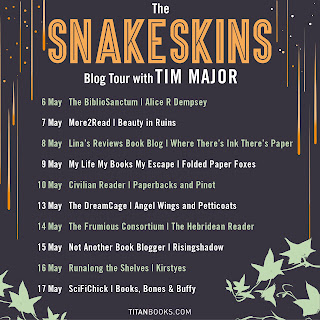 Today we're excited to be a part of Titan Books' tour for the new Tim Major speculative thriller, set in a UK that has cut itself off from the wider world following a freak astrological event known as The Fall. Enjoy this extract from Snakeskins...

The glass window lit. Caitlin glanced at her mum, who was staring straight ahead. The booth was still so dim that the scene was difficult to make out. Perhaps some of the bulbs had blown. Caitlin leant forwards so that her nose almost touched the glass.

Inside the box was a painted wooden figure. A man, four or five inches tall. He sat on the foot of his bed wearing a white nightgown that reached almost to his feet. His bare wooden toes protruded from beneath it. He turned to look up at the window above the bed, from which shone simulated moonlight. It shimmered, and when Caitlin bent to one side she could see a partly-painted, translucent disc spinning, casting shadows of gnarled trees into the room. The man watched the moonlight and his body shook, his wooden joints rattling audibly.

He stood and took a couple of paces away from the bed, centre stage. Another bulb lit, somewhere to his right, illuminating him and making the rest of the room dark in contrast. His neck clicked as he peered into the gloom.

Then something appeared in the empty space before him, becoming more and more visible. A dark-haired man in a white nightgown. But it wasn’t a solid image. It shimmered and shuddered. Even though Caitlin had seen the effect in some of the other dioramas, she was still taken aback. The figure hung in the air. She gasped as the wooden man in the scene gasped, his jaw clacking open abruptly.

“Don’t fret, love,” her mum whispered. “It’s just a trick. They call it Pepper’s ghost. There’s a mirror somewhere back there, in the dark.”

The man on the stage staggered backwards. He raised his spindly arms and the nightgown dropped down to his elbows, revealing tiny joints.

Then the ghostly image before him warped, as though it were a reflection in water and somebody had dropped a stone in. The tiny man bumped against the bed. He watched, and Caitlin watched, as the hanging figure became as speckled and insubstantial as an image on an old-fashioned TV. Then it began to rise. No, that wasn’t quite right. Not all of it, only the top, stretching and then dissipating before vanishing entirely. Within a few seconds the entire reflected person appeared to have drifted away like dust.

And then another person appeared. Directly behind the man, looming out of the darkness, from a space that had contained nothing beforehand.

“I’ve been trying to work it out,” her mum said. “The man’s nightgown is solid, so I’m thinking there must be a hinged compartment. Or perhaps there’s a hidden hatch in the surface of the stage. But no matter how many times I watch it, I fall for the trick. I get so distracted by the ghost that I forget to watch for the mechanism behind him.”

The man gave no impression of having noticed the newcomer. His shoulders slumped and his miniature hands went to his face. Relief. Joy, maybe.

The person that had appeared was his exact twin. The same man, the same dark hair and stern mouth, though lacking the nightgown. Unlike the spectral vision moments before, he was wooden, solid, real. His limbs were skeletal, all pin-joints and thin struts. His crotch was a flat, blank space. He raised his arms high above the first man’s head. Some subtle mechanism turned his tight mouth into a smile.

The first man spun around. His hands clattered against his body. He looked up at the newcomer and his jaw dropped.

Then the lights cut out.

Caitlin continued staring at the dark window. She could see nothing inside, no hint of movement. She crossed her arms tightly across her chest.

She jumped when her mum spoke. She had almost forgotten that she wasn’t alone. “Are you okay, Kit? Not scared?”

“Dad and Tobe are waiting outside.”

“Kit. This is important. A piece of history. This is how people used to feel about Charmers – that we were monsters, or cursed. This machine was made to warn the public about us. But the people who made this, they were wrong.”


Thank you again to Tim Major and Titan Books for allowing us to share this extract of Snakeskins with you. Snakeskins is published on 17th May.