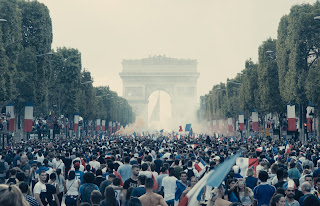 After its debut at Cannes Film Festival last week, Amazon Studios has bought the US rights to Les Misérables. Watch a short extract...

Stephane (Damien Bonnard), only just arrived from Cherbourg, joins the anti criminality brigade of Montfermeil in a sensitive district of the Paris suburbs.

Paired up with Chris and Gwada whose methods are sometimes "special" he rapidly discovers the tensions between the various neighborhood groups.

When an arrest starts to get out of hand, a drone is filming every move they make.

The film has nothing to do with either the Victor Hugo novel or the musical that it spawned. Ly is a native of Montfermeil, a suburb of France best known as the location of Thénardiers’ inn in Hugo’s classic novel “Les Misérables,” so that's where the title came from. The director became well known for his web documentaries showing the often brutal realities of living in a downtrodden community.

“Les Misérables” is inspired by the 2005 French riots, a three-week period of civil unrest characterized by violence, looting and car burnings. The film examines the tensions between neighborhood residents and police that helped inflame the rioting.