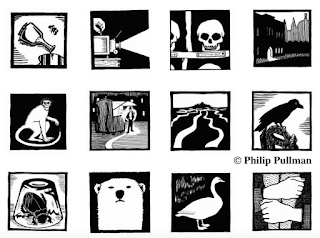 'Now is the time to choose a side.' Watch the first trailer for the BBC adaptation of Philip Pullman's series of novels, His Dark Materials...

Dafne Keen takes on the lead role of Lyra, the young protagonist of the story who lives in Jordan College, Oxford. Placed there at the request of her Uncle, Lord Asriel (James McAvoy) she lives a sheltered life amongst the scholars and college staff while under the watchful protection of The Master (Clarke Peters) and Librarian Scholar Charles (Ian Gelder).

When the glamorous and mesmeric Mrs Coulter (Ruth Wilson) enters Lyra’s life she embarks upon a dangerous journey of discovery from Oxford to London. Here she meets Father MacPhail (Will Keen), Lord Boreal (Ariyon Bakare) and journalist Adele Starminster (Georgina Campbell) at a glittering society party where she first hears about the sinister General Oblation Board. Lyra is subsequently thrown into the nomadic world of the boat dwelling Gyptians – Ma Costa (Anne-Marie Duff), Farder Coram (James Cosmo), John Faa (Lucien Msamati), Raymond Van Geritt (Mat Fraser), Jack Verhoeven (Geoff Bell) and Benjamin de Ruyter (Simon Manyonda) who take her North in her quest. Once in the North she meets charismatic aeronaut and adventurer Lee Scoresby (Lin-Manuel Miranda) who joins them on their epic journey and who becomes one of Lyra’s closest allies.


Tom Hooper (The King’s Speech, Les Miserables) is the lead director and helms the first two episodes with Dawn Shadforth (Danny Boyle’s Trust, Kylie Minogue’s Can’t Get You Out of My Head) directing episode three and Otto Bathurst (Robin Hood [2018], Peaky Blinders) directing four and five. The drama is produced by Bad Wolf and New Line Cinema for BBC One.

Pullman's books have been adapted for the screen by Jack Thorne, who said “His Dark Materials are the most beautiful set of books, taking us into a world of constant imagination. Reading them I was a massive fan, in adapting them I've increasingly felt in awe of them. It's the constant invention, the way the story never sits still, and that the characters constantly surprise you. It's been a joy being part of a creative team for this; from Tom's [director Tom Hooper] incredible analytic mind and amazing eye, to Joel's [Production Designer Joel Collins] beautiful world building, to everyone else involved. And then there's the cast, which has proved to be the cast of dreams, we are so lucky to have been able to entice them in.”

At the time the work was commissioned, Philip Pullman said “It’s been a constant source of pleasure to me to see this story adapted to different forms and presented in different media. It’s been a radio play, a stage play, a film, an audiobook, a graphic novel - and now comes this version for television.

"In recent years we’ve seen the way that long stories on television, whether adaptations (Game Of Thrones) or original (The Sopranos, The Wire), can reach depths of characterisation and heights of suspense by taking the time for events to make their proper impact and for consequences to unravel.

"And the sheer talent now working in the world of long-form television is formidable. For all those reasons I’m delighted at the prospect of a television version of His Dark Materials. I’m especially pleased at the involvement of Jane Tranter, whose experience, imagination, and drive are second to none. As for the BBC, it has no stronger supporter than me. I couldn’t be more pleased with this news.”

Jane Tranter, Executive Producer for Bad Wolf added “It is an honour and a joy to be part of the team responsible for bringing Philip Pullman's trilogy of novels to the BBC. Ever since they were first published these books have been a huge influence on so much of my thinking and imagination and it is enormously inspiring to be now working on them for television adaptation.

"The broad horizons of television suggests itself as the best of vehicles to capture the expansiveness of the story and worlds of Lyra and Will and I am looking forward to seeing how Northern Lights, The Subtle Knife and The Amber Spyglass will occupy their place in an audience's imagination across many episodes and seasons.”

His Dark Materials comes to BBC One and BBC iPlayer later this year.