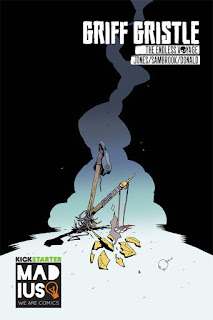 Following the explosive ending of The Siren's Song, Griff and Justine are in way over their heads with seemingly no way out... Their lives and the lives of everyone they know hang in the balance as the Children of the Waves finally look to make their move. Secrets and hidden truths begin to unfurl as Griff, Justine and an old acquaintance Rich look to the dark arts for answers, some of which might have been best left lurking below.

TWO YEARS!! Two long years I’ve had to wait for the arrival of the third instalment of my all-time favourite comic series. What were they thinking, over there in the Madius madhouse? Why was it taking so long? *gasp* What if there wasn’t going to be a third issue?! Just as panic started to set in, there came the news… GRIFF GRISTLE IS BACK!!!

Yes, the Crusty Fisher Punk has returned, with a crowdfunder currently underway (so get pre-ordering your copy here now!) and I can confirm that Messrs Jones, Sambrook and Donald have done it again. You know how much I loved the first two comics (read my reviews here and here if you don’t)? Well, let me tell you that The Endless Voyage is the best issue yet!

From the stunning pre-credits scene – yes, there’s a pre-credits scene in a comic, how cool is that? – I began to realise just what an epic adventure this was going to be. And that’s not the only thing that makes this comic feel so cinematic. The artwork of Rory Donald is, as ever, utterly glorious; with amazing combinations of colour palette along with his trademark use of heavy black shading, any page would easily frame to put on the wall. And the layout of the comic this time is absolutely spectacular too, with really innovative panel use that draws the eye in unexpected ways and adds a fascinating new depth (in some ways literally) to the action. 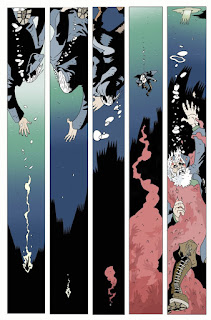 Talking of action, there is a fantastic fight scene to enjoy and one of the best jump-scares I’ve come across anywhere in graphic media. The whole story in the comic is just as good as the art. Jones and Sambrook have surpassed themselves in providing action and adventure, humour and suspense in equal measure. The big bad is Bond-level sinister and the attention to tiny details, like Echo & the Bunnymen’s Killing Moon playing on the radio, is an absolute joy! Also, because The Endless Voyage is longer than the other two comics so far, there’s time to really dig into Griff’s backstory, to find out more about his beloved Betty and their relationship, what went wrong and why he is how he is now. Oh, and we find out Griff’s full name! I’ve said it before about the Griff comics, they are a character study of a man that’s lived a life and knows its stories and, now we’re getting to know some of those stories too, it’s just superb.

Before I finish, there’s a couple of messages I have to pass on to the great gods of Griffness - 1) That ending – WHAT?! You can’t just stop there! Oh, come on!! And 2) a suggestion for a future crowdfunding perk (because see point 1) I want cool Sambrones Don’ald bottle labels to put on all my whisky rations.

So, yes, the Crusty Fisher Punk is most definitely back. And you need to back The Endless Voyage crowdfunder now, to ensure you get the latest helping of Griffy Gristly goodness as soon as you can.