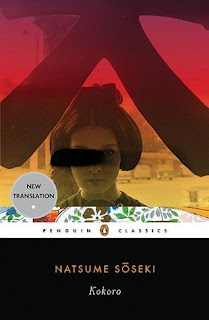 No collection of Japanese literature is complete without Natsume Soseki's Kokoro, his most famous novel and the last he completed before his death. Published here in the first new translation in more than fifty years, Kokoro—meaning "heart"—is the story of a subtle and poignant friendship between two unnamed characters, a young man and an enigmatic elder whom he calls "Sensei". Haunted by tragic secrets that have cast a long shadow over his life, Sensei slowly opens up to his young disciple, confessing indiscretions from his own student days that have left him reeling with guilt, and revealing, in the seemingly unbridgeable chasm between his moral anguish and his student's struggle to understand it, the profound cultural shift from one generation to the next that characterized Japan in the early twentieth century.

This is a marvellous book and one I'd never heard of, which is very British of me because it is a Japanese classic. It was published in 1914 and is the narrator and 'Sensei' who was an older man that the Narrator gradually builds a relationship with.

The Narrator and Sensei represent two different generations of Japanese men at a point when Japanese society was modernising. Sensei is more buttoned up, unable to share his emotions. The Narrator less so. Indeed, there is a point in the book when the Narrator does something so socially shocking that I actually half-gasped on the train.

During the course of the book, one era of Japanese history comes to an end upon the death of the Meiji Empire and that death (and what it might mean) resonates through the book.

But what makes this book great - for me - is how much suppression of emotion the main characters do and how painful that feels. I always find the 'stiff upper lip' attempt to hold back emotion of the British films of a certain type more heart-breaking than all the tears in the world. This is the literary equivalent. It reminded me of 'The Remains of the Day' a little.

It also reminded me that Japan and Britain have a lot in common emotionally. I suspect if this was an English novel it would be the sort of book that generated a new film or television adaptation every five/ten years like Jane Austen or the Brontë’s.

Its view of women is very much of its time and society btw or, at least, the characters express those views. Whether those are the views of the author himself is, of course, moot.

But it is a beautiful book that deserves to be more widely read in the Anglosphere than I suspect it might be. It also made me want to read more of Natsume's work.