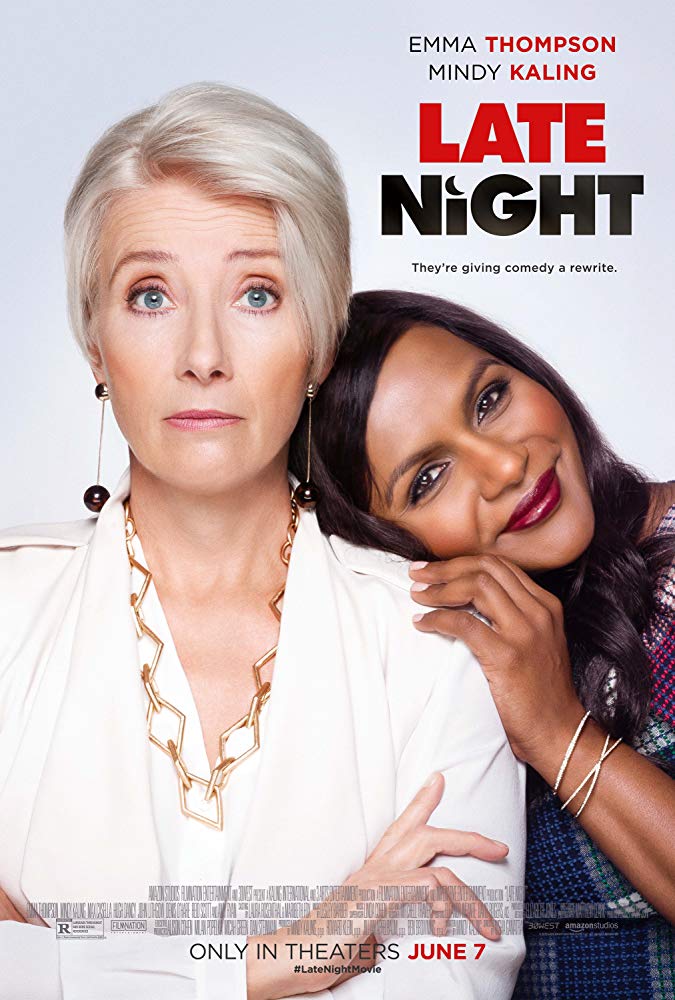 With the film due in UK cinemas on Friday, Ren Zelen watched Late Night at Sundance London film festival...

In Late Night, her first feature-length screenplay, Mindy Kaling taps into her experience as the only woman in the writers’ room of the American version The Office. The film sets out to examine the pitfalls and pratfalls of being a female comedy writer in a predominantly male world.

Kaling plays Molly, a woman desperate to break into comedy, whose path leads her to the door of her heroine, Katharine Newbury (Emma Thompson), a stalwart of the American late-night talk show scene.

Katherine declares herself a feminist, giving guest spots on her show to women in power, but when she is accused of excluding women from her own workplace, she reacts by demanding that her assistant Brad (Denis O’Hare) immediately hire a woman writer to counteract the rumour.

Katherine proves so impatient that Brad is forced to hire the first woman who turns up for a meeting. This happens to be Molly, a chemical plant worker who, through a series of very convoluted situations, manages to land an interview on the most successful late-night talk show with absolutely no qualifications pertinent to the job. It’s a pretty far-fetched scenario, and, needless to say, Molly can’t believe her luck.

She doesn’t yet comprehend that she’s merely the ‘token’ female employee and enters her workplace with unbridled enthusiasm. Predictably, she meets resistance from the men who are to work alongside her, played by Reid Scott, Hugh Dancy, Max Casella, John Early and Paul Walter Hauser.

It struck me that their chagrin is not entirely unjustified, as these are comedy writers of some experience and Molly turns up at their table without a single qualification for the job. To make her character sympathetic, Kaling presents Molly as a girl-next-door, keen to learn – a naïve newbie who will charm the old curmudgeons with her honesty and hard work.

The men are initially presented in a less than flattering light, they are outwardly careful to pay lip-service to PC sentiments, but quietly grumble about the recent losses in white male privilege and complain bitterly about how they are now the underdogs. Some of them don’t even really care very much about the show they write for, and this is presented as partly boss Katherine’s fault, as she remains unavailable to her employees and uninterested in whatever goes on in the backrooms of her show.

However, the show has steadily been losing ratings and Katherine is informed by the head of the channel (Amy Ryan) that the current season will be her last. In desperation she deigns to enter the writers’ room in an attempt to buck up her employees, coincidentally on the very morning that Molly’s starts her new job.

Katherine doesn’t want to know the names of her employees or suffer long-winded explanations about why her show isn’t working, but demands immediate answers and results. She doesn’t bother with persuasion or pleasantries when a terse response or pointed barb will do.

Having been a quality control officer in the chemical plant, Molly immediately launches into what could be improved on the show, which isn’t what Katherine or the seasoned writers want to hear – particularly as Molly is offering only critiques without suggesting solutions.

The inexperienced newbie inevitably gets a dressing down and retreats to the ladies’ bathroom for a good cry (haven’t we all been there?). 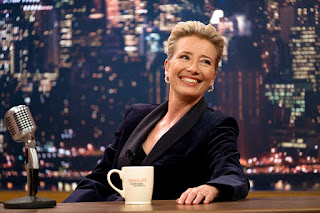 Late Night offers a setup ripe for commentary and Kaling attempts to craft a film very much in line with recent discussions over diversity in front of and behind the camera and the persistence of sexism and misogyny in the workplace.

Although the one-liners land with gratifying consistency, given its premise, the film isn’t the hard hitter one would have hoped for. Karling places her characters into a familiar narrative which unfolds in exactly the way one might expect. This does provide the film with a comforting, across-the-board appeal, but it lacks an incisive examination of the dumbing down of TV and the continuation of misogyny within showbusiness. In the ingenuity of her writing or in her on-screen presence, Kaling does not, as yet, have the flair or panache of 30 Rock’s Tina Fey.

Having said that, the rapport between Thompson and Kaling, along with spirited turns from an excellent supporting cast, make Late Night an entertaining workplace comedy, hearkening back to the wit of predecessors such as Nine to Five, but with its sights set on a critique of the contemporary entertainment industry.

Emma Thompson is great as Katherine, giving an engaging and arresting performance. She obviously relishes the opportunity to play a comedic co-lead, firing off one-liners with exuberance, but at the same time being able to exercise her skills as a dramatic actor.

So, what do we learn? - That the film and TV industries are cruel and dismissive to women over fifty, (Katherine acerbically asserts that she would be cast as Sean Penn’s mother while he marries his ‘childhood’ sweetheart Emma Stone). That diversity brings fresh ideas into a moribund situation - that televised confessionals are embarrassing for everyone, and that even though they may be perceived as cathartic for the subject and the audience, they really aren’t a substitute for actual reform. I suspect we knew all that already.

What carries Late Night along in its feelgood vein is its desire to show how, if the industry were more equal and inclusive, it would pave the way for new, stimulating, original ideas to be brought to the table. It’s also the presence of Emma Thompson, who gets to reveal her comedic and dramatic experience to great effect.

It’s rare for an actress to get such a prominent, central role at this stage of her life and career, which just goes to show what a waste of unused, mature female talent there probably is out there – and that is all rather the point, isn’t it?